Michael Moore has been in Denmark promoting his new movie Sicko, and Steen has very kindly sent me photos of his appearance on DR2 (Danish public television).

The first two subtitles say, if my translation is correct, “But the last thing we should do is what the Americans do, and privatize the public system —”

But the third subtitle has me stymied, and I’m hoping a Dane will help put it back into English for us.

Update: Exile has translated the third subtitle for me: “It has got the whole country talking about what should be done.”

Michael Moore seems to be all the rage in Scandinavia — as I reported last night, he was recently made an honorary citizen of Ladonia (which ordinary folk like me consider to be part of southern Sweden).

I say, let’s send him to Scandinavia to stay. Don’t you think he’d make a great Viking?

Pull that Rutgers cap off his head, put a helmet on him, have him grow out his stubble a bit, and put a big tankard of øl in his fist.

I can see him now… 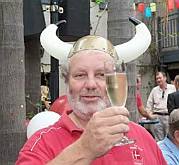 Further update: Reader SD sends this photo of Michael Moore in his future incarnation.He will, of course, have to be taught to love røget sild.

4 thoughts on “Sicko in Denmark”