Black Diamond Pictures is about to screen a new movie about the insane but charismatic founder of a religious cult whose followers are inspired to commit mass slaughter against innocent civilians.

“Wot th’-!?” you say. “So Hollywood finally gets it about Islamic terrorism, eh?” 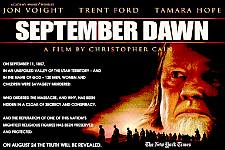 These particular murderous religious fanatics are Mormons, the followers of Joseph Smith, and the year is 1857. The film in question is called September Dawn, and is coming on August 24th to a theater near you.

Here’s what Michael Medved has to say about the movie in USA Today:

The trailer for the film makes clear its hostile point of view, with Terrence Stamp as Brigham Young announcing in portentous and menacing tones: “I am the voice of God. And anyone who doesn’t like it will be hewn down.”

The narrator then informs potential viewers that in 1857, this monster acted “in the name of God” in the savage murder of 120 men, women and children. “Who ordered the massacre, and why, has been hidden in a cloak of secrecy and conspiracy,” he solemnly intones. “And the reputation of one of the nation’s mightiest religious figures has been preserved and protected — until now!” At that point, the trailer offers a black-hatted character screaming, “Mormons, do your duty!” to command stern-faced gunmen to blast away at innocent victims.

The historical “Mountain Meadows Massacre” portrayed in the film certainly constitutes an atrocity, with paramilitary forces of the new Mormon settlement in Utah slaughtering members of a wagon train from Arkansas. Far from being “hidden in a cloak of secrecy and conspiracy,” the awful occurrence has received regular historical commemoration (including regretful recognition from Mormon officials) and inspired numerous books, articles and documentary films.

These explorations reach no definitive conclusions on Brigham Young’s complicity in the massacre, but the movie leaves no doubt at all — using fierce quotations by Young, but using those words wildly out of context. The film, for instance, downplays events preceding the Mountain Meadows rampage, including brutal persecution of Mormon settlements in Ohio, Missouri and Illinois, that led to the trek to Utah. Just before the incident the film portrays, the federal government sent troops West with orders to remove Brigham Young as governor of the territory, and the movie never acknowledges Young’s ultimate agreement to step down peacefully, avoiding the feared bloodbath between U.S. soldiers and Mormon militia.

In fact, Hollywood’s reluctance to portray Islamo-Nazi killers remains difficult, if not impossible, to explain. Since 2001’s devastating attacks, big studios have released numerous movies with terrorists as part of the plot, including Sum of All Fears, Red Eye, Live Free or Die Hard, The Bourne Ultimatum and many more, but virtually all of them show terrorists as Europeans or Americans with no Islamic connections. Even historically based thrillers downplay Muslim terrorism: Steven Spielberg’s Munich spends more than 80% of its running time showing Israelis as killers and Palestinians as victims, while Oliver Stone’s World Trade Center highlights the aftermath of the attacks with no depiction of those who perpetrated them. United 93 stands out among recent releases in showing Islamic killers in acts of terror — and it would be hard to tell that story without portraying the suicidal hijackers.

The idea that the makers of this movie are courageously shining a light on the truth and revealing a historical coverup is just the latest example of Hollywood’s preening narcissism. Run a Google search on “‘Mountain Meadows Massacre’ September 11 1857” and you’ll discover no fewer than 16,000 hits concerning the event, many of them with a copious wealth of historical detail. The Mountain Meadows Massacre is just about as hidden as Paris Hilton’s sex life.

So what’s the deal? Why make all this effort to create 9-11 relevance on a terrorism topic without tackling the real issue of today’s Islamic terrorism?

I can think of at least three reasons:

What it will take before Hollywood makes an honest movie about Islamic terrorism?

Lord knows, the studios could turn a tidy profit on such a movie. Flight 93, the toppling of Saddam, the capture of Khalid Sheikh Mohammed, the death of Abu Musab al-Zarqawi — I can think of a dozen subjects that would make great cinema and have millions of moviegoers paying hard cash to see the action on a big screen.

Not bloody likely, though. Not in my lifetime.