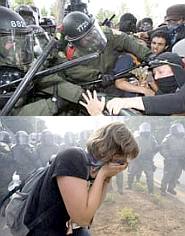 The image at right is from a protest yesterday at Montebello in Quebec. The occasion was a two-day summit for the leaders of Mexico, the United States, and Canada, with President Bush, Prime Minister Harper, and President Calderon in attendance.

And, just for a change, the protesters (or at least some of them) weren’t there to protest globalization, or capitalism, or the exploitation of the Third World, or global warming, or cruelty to animals. They were there to protest the SPP, and the secrecy surrounding it.

Fjordman, Dymphna, and I have written repeatedly about the Security and Prosperity Partnership (SPP), a pact between the United States, Canada, and Mexico that was signed by the three countries in 2005. Those of us who are of a paranoid bent tend to view the SPP as a stepping-stone towards the NAU, the North American Union. For the transnational elites in government, business, and NGOs, the NAU is the ideal solution for North America. Modeled on the European Union, it would arrange the affairs of the continent in such a way that the rich and powerful can easily maintain and consolidate their positions, doing away with the annoying intrusion of democracy, the consent of the governed, and other such trivial concerns.

As the North American Security and Prosperity Partnership summit wrapped up Tuesday, Prime Minister Stephen Harper said the three leaders are “committed to working together on mutual security and continued economic growth.”

The initiative, known as the SPP, has its share of critics and nearly 1,000 protesters made the trip to Montebello on Monday to demonstrate their opposition.

Earlier in the day, the leaders met with an exclusive group of business executives — the North American Competitiveness Council.

The group is comprised of 10 chief executive officers and corporate chairmen from each country and was created under the SPP to advise leaders on how best to strengthen North American integration.

The group was to present a report to the three leaders, showing what progress has been made so far on the SPP and what work still needs to be done. The report was expected to contain recommendations on how to free up the flow of goods and people across the border, and reforms to harmonize regulatory roadblocks to trade. [emphasis added]

How to free up the flow of goods and people across the border.

That’s the important part of this exercise: how to create a new arrangement in which borders are no more than lines upon a map. The idea is to optimize the business arrangements that keep power flowing smoothly into the hands of the correct people. The agreements that are crafted at venues like Montebello are crucial and have far-reaching effects, but they don’t have to be ratified by the U.S. Senate, and any consultation with Congress is simply a courtesy.
– – – – – – – – –
There were protests yesterday, as reported by the CBC:

Police used tear gas and pepper spray against protesters who were hurling rocks and branches during confrontations outside the leaders summit in Quebec on Monday.

Police arrested at least one protester in the small resort town of Montebello, near Ottawa, where Canadian Prime Minister Stephen Harper is meeting with U.S. President George W. Bush and Mexican President Felipe Calderon to discuss issues including border security and free trade.

At least 500 protesters took part in a march outside the hotel, carrying signs with slogans such as “No to Americanada.” Others held a peaceful family-friendly rally away from police lines.

“No to Americanada!” — I like that slogan. We need to fit Mexico into it somehow, though.

Canadians have the same objections to the SPP that we do:

…protesters say the SPP is anti-democratic because it didn’t require a vote in Parliament or a change in the law.

“If this is such a wonderful deal and it is about protecting North Americans from shoddy products or whatever they’re now saying … then be proud of it, stand up, tell us what’s in it … and send it to our Parliament for oversight,” Maude Barlow, head of the Council of Canadians, said in an interview from Ottawa Monday morning.

Critics say the council is proof the three governments are only consulting big business, and ignoring everyone else, in their pursuit of closer economic and security ties.

They also oppose what they say are secret negotiations over everything from energy trade to border security.

The Star had a similar report:

One common complaint echoed by all is the secrecy surrounding the meeting.

Maude Barlow of the Council of Canadians called for a moratorium on the “profoundly anti-democratic” SPP until the citizens of all three countries are consulted and their elected representatives are given oversight over the business-driven initiative.

The SPP’s proceedings are indeed “profoundly anti-democratic”, but they are hardly secret. Like the EU’s Barcelona declaration and the EuroMed partnership, the process is not so much secret as it is deliberately obfuscated. It is so tedious, boring, mind-numbing, and couched in techno-jargon as to deter all but the most dedicated investigation. Layers of bureaucratic boilerplate, massive pdf downloads that will tie up your bandwidth for hours, and all so that you can read timeless prose such as this (yes, it’s a pdf):

The analysis, consensus-building and advocacy conducted through the NASTC facilitated progress in defining better subsidy disciplines for the steel sector world wide. Building on the common objectives established by the North American governments during the OECD Steel Subsidy Agreement talks, the three governments will continue efforts to curtail subsidization of the steel sector through the OECD and will seek opportunities to develop or strengthen subsidies disciplines affecting steel in other multilateral negotiations. The three governments will continue efforts to explore and identify other opportunities for coordination in multilateral arenas, including the Rules, Non-Agricultural Market Access, and Trade Facilitation negotiations of the WTO’s Doha Development Agenda. Fostering more regular discussion among delegations to seek clarification of positions will be a key component of these efforts.

When I start reading an SPP document, my eyelids droop and my head immediately begins to nod. All the Benzedrine in the world avails you little in the face of such turgid bumf. And I chose this selection at random; it’s all like this.

It’s the purloined letter, hidden on a desktop full of unreadable official reports.

She has some unexpected support from top business leaders.

A report from the Canadian American Business Council says non-governmental organizations and so-called civil society groups – not just blue chip corporate CEOs – should be invited to participate in the SPP.

The council says much of the opposition to the SPP revolves around process rather than substance. It notes that one of the chief criticisms is the “lack of transparency” in the way in which a 30-member committee of business leaders from the three countries makes recommendations to Harper, Bush and Calderon.

The group says the political leaders should embark on a public education campaign to explain the SPP.

The council is right about the “lack of transparency”, but it’s the cloudy prose that keeps it from being transparent. Any “public education” about the SPP should be written in clear English so that even bozos like me can understand it.

I’m ready. Go ahead and educate me.

12 thoughts on “Another Step Towards the NAU”