Last December, Gates of Vienna reported on the hostage taking by the Libyan government of a Palestinian doctor and the Bulgarian nurses. Their imprisonment began in 1999, on trumped-up charges that they were responsible for the spread of HIV to hundreds of children at a pediatric hospital in the city of Benghazi.

But the truth is more cynical and more complicated than Gaddafi’s callous lie about their wrongdoing. From Le Monde here is the succinct version of the whys and wherefores of this travesty:

‘It has been proven and demonstrated that the Bulgarian nurses and the Palestinian doctor are hostages of Gaddafi’, the Moroccan writer and the Gonkur literature award winner Tahar Ben Jelun writes in an article published in the French daily Le Mond.

This is a scandal, that deserves condemnation, just as every other taking of hostages’, he writes.

‘Muammar Gaddafi, who has made the political and moral mistake to admit the responsibility of the country for the attack over Lockerby and against a French town Niger undirectly, by paying the compensations is now trying to do the opposite — to restore the money from a different place and to calm the anger of the families, ruined by the misfortune. Thus we are entering the logic of the Libyan tradition, which can be called ‘blood money’.

‘After I visited Libya in 2004 on invitation by the French Ambassador I found out how far this country is from any democratic state’, Jelun writes.

The reality for these children and their families is a scandal shared by Gaddafi and his grasping paranoid tyranny, the World Health Organization and its sloppy approach to medical care, and the EU, with its refusal to do anything but engage in impotent negotiations. “Negotiate” here means “act like the US State Department”: wring your hands, make empty noises and then claim the credit for having done something when things start to move. Here’s the news release on their hard work:

The Portuguese EU presidency will continue working for the freedom of the five Bulgarian nurses sentenced to death in Libya, just like its German predecessor did.

It will work in close co-operation with the European Commission and Bulgarian authorities so that the nurses return home.

“Close cooperation” so far has translated into eight years in prison for these innocent people. So does that mean eight more years of languishing in jail on the whim of a crazy man determined on revenge for the payout on Lockerbie?

There is no doubt of their innocence — not that it matters. As I reported back in December:

DNA analysis has confirmed that the virus that infected the children could not possibly have been spread by the accused nurses, since it was present before they arrived. But the Libyans aren’t about to let the facts stand in the way of a good infidel hanging.

Gaddafi knows they’re innocent, too. However, he wants his money back from his Lockerbie payout, and he’ll use the suffering of children and their families to get it. That is his whole motive for this caper.

Meanwhile, the real cause for the infection of these children, and children all over Africa, is reusable needles rather than one-time retractable syringes that prevent needles from being used a number of times thus increasing the risk for the spread of HIV.

An essay on the situation is here:

An expanding body of evidence challenges the conventional hypothesis that sexual transmission is responsible for more than 90% of adult HIV infections in Africa. Differences in epidemic trajectories across Africa do not correspond to differences in sexual behavior. Studies among African couples find low rates of heterosexual transmission, as in developed countries. Many studies report HIV infections in African adults with no sexual exposure to HIV and in children with HIV-negative mothers. Unexplained high rates of HIV incidence have been observed in African women during antenatal and postpartum periods. Many studies show 20%-40% of HIV infections in African adults associated with injections (though direction of causation is unknown). These and other findings that challenge the conventional hypothesis point to the possibility that HIV transmission through unsafe medical care may be an important factor in Africa’s HIV epidemic. More research is warranted to clarify risks for HIV transmission through health care. [my emphasis] 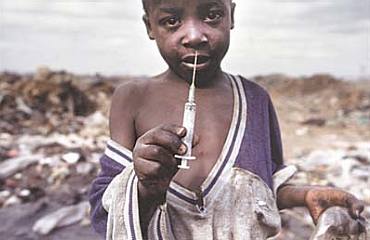 In other words, “safe sex” is not the major problem. Safe vaccinations are. WHO pushes childhood vaccinations while knowing the availability of one-use needles is limited, and many children and adults are likely to be infected with HIV, hepatitis, and the other blood-borne diseases. But so what? At least their statistics look good.

Meanwhile, the International Council of Nurses has expressed their shock at the lack of adequate nursing care provided by WHO. In May of this year, they issued a press release questioning the practices of the World Health Organization:
– – – – – – – – – –

The governing assembly of the International Council of Nurses (ICN) was shocked to learn of the decline, from an already unacceptably low level, in the number of nurse and midwife posts across all regions and clusters of the World Health Organization (WHO). The data from the WHO human resources report to the 2007 World Health Assembly, revealed that of the health care professionals working on staff at the WHO a mere 1.3 % are nurses; 91.6 per cent are physicians. At 1.8%, dieticians and nutritionists have greater representation than nurses. ICN’s Council of National Representatives (CNR) also learned that the key position of WHO Chief Scientist for Nursing and Midwifery has been reduced to part time due to other assigned roles time and staff support for this office is contracted on short term and part time bases.

This virtual absence of the nursing voice in WHO policy and implementation threatens all WHO programmes, contradicts the organisation’s claim to be addressing the current global crisis in health human resources — focused mostly on nursing, and undermines the effort to attain the Millennium Development Goals (MDGs).

Bill Gates and all the entertainment personalities who have pledged so much money to Africa’s health care could do wonders with one simple move: insist on only retractable, one-use needles for vaccinations. Then children wouldn’t follow hospital garbage trucks to the dump so they can scrabble through bacteria-laden refuse (in their bare feet) to find used needles to sell.

And where is the Live Aid concert to get these nurses out of jail? Or even to get more native nurses trained in Africa? Where’s the push for real health initiatives instead of the agenda-driven WHO philosophy?

How about Gaddafi? He responds to money and to viable threats to his reign, but not much else. Now he wants ten million for each child from that hospital in Benghazi: by some amazing coincidence, the same amount he had to pay for each victim of Lockerbie.

Meanwhile, the nurses and doctor have languished in jail, forfeiting eight years of their lives for a huge lie. And the UN and EU? Why, they’re negotiating, even as you read this.

Eight years of negotiations and all we have are these cynical machinations between a lunatic and a bunch of impotent bureaucrats who don’t really care if these nurses ever see daylight again. The bureaucrats know that we know they have no leverage and they don’t care that we know.