Haji Hassanal Bolkiah Mu’izzaddin Waddaulah, the Sultan of Brunei, is a rich dude. To put it mildly.

The man invested more in his private jet than I will ever earn in a lifetime. Take a look at this plane. Make sure you click on all the photos and enlarge them. 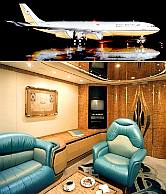 This Airbus 340 aircraft was “remodeled” in Waco . Yes, the sinks are solid gold and one of them is Lalique crystal. The Sultan bought the aircraft for roughly $100M; had it flown to Waco, brand-new, had the interior completely removed; and had the folks at E-Systems (now Raytheon) install $120M worth of improvements inside and outside.

Among the improvements are all those lavish fittings you see in the photos, including the (reportedly) gold fixtures in the bathroom.

What happened to his private, luxurious A-340 or B-777 (all decked out with gold poopers and seating for ten people)?

It’s in the shop being remodeled. The poopers are now being replaced with swiveling models that can be turned to face away from Mecca when the plane is on certain routes. Until now the plane often had to change course during pooping, which led to trouble with the aviation authorities.

LN is not only notoriously indifferent to sourcing his material with links, he’s also fond of pulling my leg. I’ve googled my fingertips raw trying to verify his story, but with no luck so far. So we’ll just have to take his word for it.

If it’s not true, it oughta be. To quote the late John Gardner (from memory, in The Wreckage of Agathon — y’all correct me if I get it wrong), “Since the truth is ultimately unknowable, what matters is not what is true, but what is entertaining.”

And this story is definitely entertaining.

4 thoughts on “The Mecca-Avoidant Potty”