The Counterjihad Calendar Project is designed to support and supplement the efforts of Stop the Islamization of Europe and the group’s plans for a Counterjihad rally in Brussels on September 11th. SIOE is a joint effort put together by SIAD in Denmark and Akte-Islam in Germany, who have combined forces to stage a protest at the EU Parliament on the anniversary of 9-11. My goal is to have the complete calendar available before then.

A few weeks ago I posted a preliminary version of my calendar idea, and took suggestions from readers for improvements in the design. I’ve heeded some of the advice, and the revised version of January is ready to go.

Each month will feature an Islamized monument or building that is iconic for the country. Some of them will be well-known to everyone; others will be familiar mainly to the citizens of the countries involved.

The end product will be a wall calendar that will be sold at our Café Press store.

I started with France because — let’s face it — the French have the most impressive monuments in Europe.

Each calendar image has to fit on an 11″x17″ page, so I will be inserting a sidebar on the left side of the page, as shown in the January image below (click the image for a larger version): 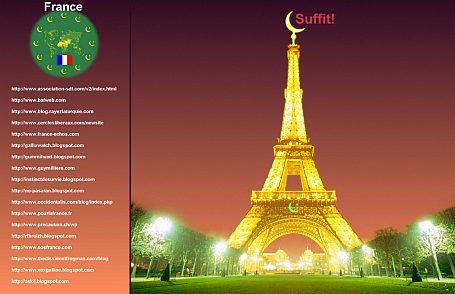 The “Islamized Europe” logo will appear at the top of the sidebar on each calendar page, and the country featured that month will be highlighted in red on the little map. Readers will notice that I took their advice and simplified the background of the feature image.

On the sidebar I will list as many Counterjihad websites as I can find from the country shown on that page. The French links I have collected so far are:

A reminder — these are the twelve countries I will be using for the 2008 calendar:

As I feature each country in a post, readers may post their suggested counterjihad links in the comments, or send them via email. Like many Gates of Vienna projects, this will be a group effort.

Next up (for February): Denmark. Vikings, get ready with your links.

12 thoughts on “The Counterjihad Calendar: January”