The Counterjihad Calendar Project is designed to support and supplement the efforts of Stop the Islamization of Europe and the group’s plans for a counterjihad rally in Brussels on September 11th. SIOE is a joint effort put together by SIAD in Denmark and Akte-Islam in Germany, who have combined forces to stage a protest at the EU Parliament on the anniversary of 9-11. My goal is to have the complete calendar available before then; when it’s finished, it will be available at our Café Press store..

After consulting with Phanarath, I chose Christiansborg as the architectural icon for Denmark. It may be unfamiliar to most people outside of Denmark, but it is very important and well-known to the Danes (click for a larger image). 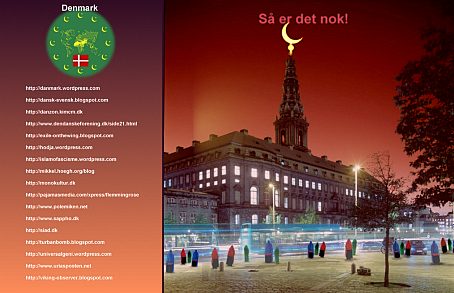 Christiansborg is the home of Folketinget, the Danish Parliament, the symbol of Denmark’s enduring democracy.

Here’s the list of Danish Counterjihad websites that I have collected so far:

For each country involved, I invite readers to post suggested counterjihad links in the comments, or send them via email. I particularly need links for the Netherlands, Germany, Greece, India, and Italy.

Next up (for March): Germany. Which German monument do you think I’ll use?

2 thoughts on “The Counterjihad Calendar: February”