Over on The Neighborhood of God I recently wrote about a phenomenon called “lol cats.” I’d never have stumbled across them on my own, but the future Baron is in that computer demographic that creates and spreads such things.

Here is what I wrote at the time:

Have you seen them? 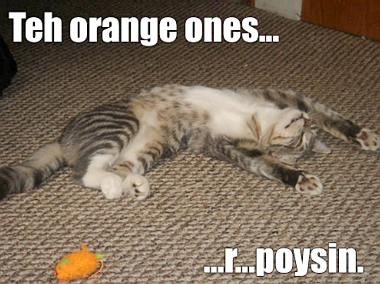 There are several running jokes in this huge collection of animal pictures (mostly of cats interacting in their environment while the omniscient human narrator provides the dialogue).

Wikipedia has an entry for lolcats — and another image — explaining both their provenance and the idiosyncratic pidgin language often employed in the captions.

A lolcat is an image macro featuring a photograph of a cat with a humorous and idiosyncratic caption. The name “lolcat” is a compound of lol and cat. lolcats are also referred to as cat macros.

lolcats are created for the purpose of sharing with others on imageboards and other internet forums, especially on Saturdays (“Caturdays”). lolcats are similar to other animal-based image macros such as the O RLY? owl, but the cuteness of cats “enhances” the appeal and increasing prominence of the Internet meme. lolcat is an example of anthropomorphisation.

lolcat images usually consist of a photo of a cat with a large caption characteristically formatted in a sans serif font such as Impact or Arial Black. The image is, on occasion, digitally edited for effect. The caption generally acts as a speech balloon encompassing a comment from the cat, or as a description of the depicted scene. The caption is intentionally written with deviations from standard English spelling and syntax, featuring “strangely-conjugated verbs, but [a tendency] to converge to a new set of rules in spelling and grammar.” These altered rules of English have been referred to as a type of pidgin or baby talk. The text parodies the grammar-poor patois stereotypically attributed to internet slang.

It also has a link further down the page to information on snowclones, an evolution in speech formation that I will leave to you to peruse. Let us just say that the more things change, the more they change.

You can only surmise how things will evolve after you’re gone; what was our language will be very different in a hundred years, and it would ring strange and discordant to our ancient ears if we were able to return. Fortunately, we can’t.

Meanwhile, George Bernard Shaw is rolling over in his grave…but then he needs the exercise anyway.

Next will be ROTHLHAO dog pictures. Except dogs are not as flexible as cats. All they can do is sad and glad. Hard to get a huffy looking dog, or an imperious one. They are buffoons. Amusing, but without the possibilities for depth that the lolcats possess. Perhaps it’s merely a matter of spinal differences.

Enjoy lolcats. See how many you can scroll through before you quit.

Once you see those “I can haz cheezburger” on “Caturdays” your time doesn’t belong to you anymore. Not to mention the diagrams for the monorail cat which keep popping up. 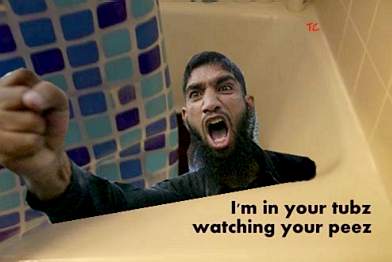 How quickly things morph: a cat turns into Rageboy (look carefully – you can just barely see the cat behind The Boy).

These lol terrorists may be funnier than the cats…well, to some of us anyway. Anyone without a strong sense of Silly (which is a virtue I possess only in modest amounts, but enough for this) will quickly jump on the bandwagon here. It’s a reality which badly needs a good dose of indelible ridicule to place it in perspective. I can only imagine what “Are We Lumberjacks?” will send into them, not to mention “Planck’s Constant”. Those guys have photoshopped some gems and this is just their cup of tea.

Meanwhile, lol terrorists is just getting off the ground. It has only a few pages so far, instead of the hundreds in lolcats. However, by this time next month, I’ll bet it will be just as big. Cats are funny, but terrorists are funnier — you didn’t know that, did you? Think of Monty Python and how they might handle the terrorist “situation”; lol terrorists are obviously direct descendants of the Flying Circus. 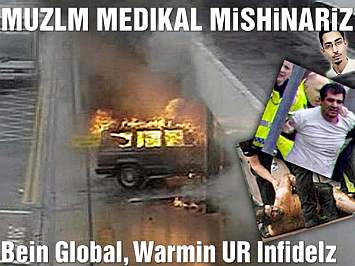 Our thanks to reader RN for alerting us to them and sending us one of his own submissions. He definitely has the quirkiness down pat.

Being able to laugh at these creeps is part and parcel of the promised “pursuit of happiness.” In Europe, I suppose these would be examples of hate speech. In America, it’s just a sign of people with a great sense of humor (more men than women,don’t you think?) who probably live in messy rooms and whose mothers are constantly nagging them to get a job.