KGS of Tundra Tabloids just sent us this photo, which he got from the Wiesenthal Center. The photo credit is to Rabih Moghrabi/AFP/Getty Images. 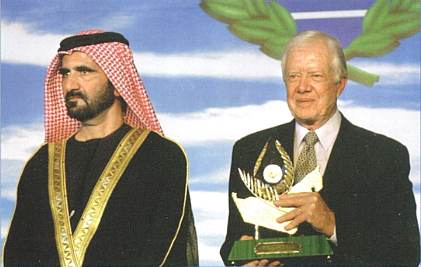 Caption: President Carter receiving the International Zayed Prize for the Environment in 2001 from Sheikh Mohammed bin Rashid al-Maklum, Crown Prince of Dubai and UAE Minister of Defence. The prize included $500,000. The following year President Carter refused the Wiesenthal Center’s request to repudiate the Zayed Center in Abu Dhabi for a symposium where it was asserted that the Nazi Holocaust was a ‘false fable’.

’Nuff said. Worth a thousand words.

7 thoughts on “Update on Jimmuh from the Ummah”