Our Swedish correspondent LN emailed me this morning about Margot Wallström. Ms. Wallström is a Swede — or, rather, a “person of Swedish background” — who is Vice President of the European Commission in charge of Institutional Relations and Communication, which means she is a consummate Eurocrat. Like most members of the EU bureaucracy, she is also an Associate Sultan of NGOistan.

Or, as LN describes her, “the Swedish flummery generator in Brussels”.

As it happens, Ms. Wallström keeps a blog. Here’s an excerpt from her most recent post: 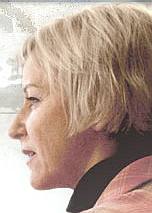 Yesterday was the national day of Sweden and in the early morning I listened to an interesting radio programme. Young Swedes of Ethiopian and Syrian origin were interviewed about national pride and about belonging to, or feeling excluded from, society. A woman said that although she speaks perfect Swedish, has settled in a small town and probably will live her whole life there, she still feels like a guest or visitor, not integrated in the community. What more can we do to get in contact with each other? I believe in the simple idea of being better “hosts” or neighbours to immigrants or refugees. You can act as a contact family, help children do their language homework, etc I myself feel proud to be Swedish but do not see that being in contradiction to feeling also European or World citizen.

Ah, yes, the quintessential Swede, who embraces “World citizenship” in order to avoid the uncomfortable fact that Sweden itself is in the process of vanishing.

Notice the unspoken assumption: the discomfort of a resident alien in Sweden must be the fault of the host culture. What’s the basis for this assumption? Whence this premise? It is, after all, the axiom from which the entire calculus of Multiculturalism is deduced. Is it like Euclid’s First Postulate, something which must simply be taken as fact? Or may we debate it?

If I moved to Sweden, I would expect to feel excluded. After learning Swedish and adopting the major customs of the country, I assume that a measure of acceptance would be granted me. After thirty or forty years of residence there I would have become a Swede, albeit one who still spoke with a ludicrous American accent.

That’s normal. That’s natural. And up until the middle of the last century, that was the way every country in the Western world experienced the assimilation of foreigners.

But now our ways are different. Now we are required to assimilate ourselves to the foreigners. Now we must adopt the vapid bromides of Multiculturalism, and help foreign children with their language homework so as to be better “hosts”. Now we are citizens of the World.

And we will soon become citizens of the Ummah, since that is the form the world will take when the last guardians of the West abandon their posts on the ramparts.

I was appointed Vice President of the European Commission in charge of Institutional Relations and Communication in August 2004. President Barroso created this post in order to improve the way we communicate ‘Europe’ to citizens. From 1999 till 2004, I served as Environment Commissioner in the Prodi Commission.

Before dedicating myself to the European Union, I have spent most of my professional life being active in Swedish politics. From 1979 till 1985, I was Member of the Swedish Parliament. In 1988, I became Minister of Civil Affairs responsible for Consumer, Women and Youth matters and held this post for four years. In 1994, I was appointed Minister of Culture for two years and then Minister of Social Affairs for another two years.

Communications also played a key part in my career. From 1993 till 1994 I worked as CEO of TV Värmland, a Swedish Regional TV network. Between 1998 and 1999, I lived in Colombo (Sri Lanka) and worked as Executive Vice-President of Worldview Global Media.

Notice that her career in actual elective office spanned a mere six years. And for a member of the Swedish ruling party, elections are not a particularly democratic experience. Seats are distributed to the correct people according to that ubiquitous Swedish method: consensus.

So Margot Wallström has had very little experience in consulting the will of her people.

The rest of her adult life has been spent knocking around the various cubbyholes of the socialist state — or meta-state, in the case of the EU. Even the Swedish media, and presumably Worldview Global Media, are quasi-state organs. So when Ms. Wallström “communicates”, it is pretty much a one-way street. The nattering nabobs of the EU speak, and the peons in street must listen.

…although the Commission is already doing a lot, we all need to act together with more energy if we are to put an end to the killing and insecurity in that troubled region. This is also in Europe’s own interest since the conflict in Darfur is now spreading across borders. If it is not resolved, the impact will be felt in Europe too.

No kidding. And what precisely does “acting with more energy” mean to Margot Wallström and the EU? Presumably it means talking a little louder, or convening a new task force, or issuing a new 1,200 page EU Commission directive.

Without a doubt the phrase “by force of arms” will never be used. No military solutions are conceivable to the peace-loving leaders of the EU. The Darfur problem will eventually be resolved when all the targeted victims are dead or enslaved, and then the Eurocrats can concentrate all of their attention on more important issues, like the environment.

In fact, most of Ms. Wallström’s blog post is spent on global warming, Kyoto, and other environmental issues, with a strong emphasis on “what must be done”. The solutions offered for any problems will not be put to a referendum, nor even be up for discussion. The people of various European countries will not be consulted, and in many cases they will not even be informed. 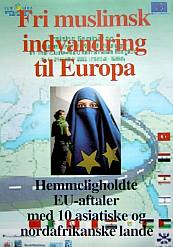 One of the uninformed and unconsulted organizations is a group called Foreningen Dansk Kultur, or the Society for Danish Culture. This morning I ran across an article about them on Snaphanen (in Danish). Steen has photographed and posted a Dansk Kultur pamphlet entitled “Free Muslim immigration into Europe — the secret EU-deal with ten Asian and North African countries”. Dansk Kultur has drawn on some of the same sources cited by Fjordman to reveal the conscious, methodical, and very quiet plan to absorb massive numbers of Muslim immigrants into the heart of Europe.

Europeans are not being informed about the Islamic superhighway that their élite guardians are busy opening into their homeland, so Dansk Kultur has taken upon itself the task of informing them. The pamphlet describes the Barcelona agreement of 1995, and the EU’s insistence that “Islam must be respected”.

My Danish is not good enough to translate the whole thing — maybe some of our Danophone readers can follow the link, translate any interesting parts of the pamphlet they find, and leave the results in the comments.

Europeans are not being consulted, and neither Dansk Kultur nor any other non-state entity can do anything to help that situation.

But the modus operandi of the soft totalitarians — not consulting the people, maintaining a forced consensus, and suppressing alternative information — will not work. It’s like putting a hand on the lid of a boiling pot: eventually the steam pressure will overcome the strength of the arm holding it, and scalding water will explode across the kitchen.

Margot Wallström is one of those with a hand on the pot, and she will eventually face a scalding surprise, although it may not occur until after she has retired to collect her generous state pension.

In the meantime, she represents neither the people of Sweden, nor any other particular country, nor even Europe.

She is the World.

A final word from LN: “We Swedish citizens are certainly not proud to have Ms. Wallström as our EU-deputy.”

10 thoughts on “Highway into the Heart of Europe”