My heartfelt thanks go to everyone who has written, commented, and offered prayers for my most recent fall from grace.

I do think sometimes that I was not meant to walk on two feet, since it appears that I am to stay ever an amateur at the task of remaining vertical. Anyway, as an old college friend of the Baron’s used to say, “Never miss a chance to sit down.” For the time being, I shall join him, my gluteus maximus glued to the chair and my feet planted firmly on the floor. From this position it is much easier to issue orders to the fleet of foot by whom I seem to be surrounded…well, not really “orders,” as such; I consider them gentle suggestions. 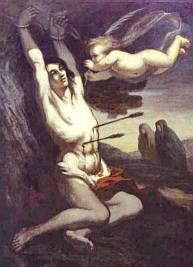 The problem with these traumas is that they exacerbate all the other slings and arrows fortune has chosen just for little old me. Treatment for one problem usually exacerbates a variety of the others in an annoying downward spiral. Just as in the rest of life, whatever is making the most noise — i.e., — causing the most pain — is the squawker which gets the most immediate attention.

While I heal, I’ll be posting on some people and ideas that I’d been collecting with the intention of getting around to them “sometime.” Sometime, dragging her weary wheel, has arrived.

Thus my posts will be more focused on intellectual notions and less on the passing — and increasingly alarming — scene. And unless it’s something which absolutely seems to require comment, say Hillary chooses Ron Paul as her vice presidential running mate, I’ll skip politics. Not only do others cover the subject better and in more depth than I, but politicians seem more and more like frivolous entertainers — and vice versa. Lord save us from the DiCaprios who want to save the world based on very vague ideas about how it functions to begin with. Save us, too, from the Kennedy clan, that dynasty of entertaining and dysfunctional politicians and would-be do-gooders.
– – – – – – – – – –
Having claimed that my posts will be “focused” I must amend that to say they will be as focused as narcotics allow. I cannot understand how anyone can get addicted to pain killers. Unless you’re in extremis, the side effects of itchiness, nausea, and a sense of disconnection between brain and body are most unappealing. Hydrocodone, which is supposed to alleviate the pain, makes me itch so badly that I am forced to take an antihistamine for that. Unfortunately, both have the side effect of making me dizzy, which serves to increase the likelihood of another losing bout with gravity.

There’s nothing for it but to simply eliminate gravity — a nice slice through that there particular Gordian knot.

I have some books to review, most of which you probably haven’t seen or haven’t looked at in a long while. I thought reading would be a welcome distraction during this recovery period, but I find books to be heavy and unwieldy when trying to read lying down. And tiring to read whilst sitting up. Thus, these will be books already consumed for the most part, or lightweight paperbacks which can be moved with ease. I have teetering stacks of both.

Meanwhile, as is ever the case, the Baron will continue to do the heavy lifting. Some things never change…