For those of you (like me) who have a hard time researching byzantine legislative news, I’ve got a jumping-off place where you can plunge into the fray.

Governing.com covers the spectrum from the local to the federal level. It has a myriad of stories and reports that I’ve not seen elsewhere. For example, there is this – the Homeland Security chief saying we can’t stop illegal immigration (which I read between the lines and find the coded message, “so pooh on the Senate vote”):

Here’s their index page, full of juicy links and information.

And here is their daily blog, The 13th Floor., where you can learn that the Alabama governor has issued a proclamation for a week of prayer, petitioning God for rain. 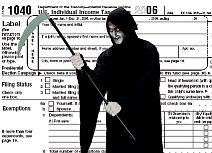 I suppose it’s one way to pass the time while you wait for the thunder that will eventually come anyway. He’ll no doubt get his answer by way of a hurricane. And then there will be another petition for money – but this one will wend its way to the Federal government…you know, the other god. One handles death, the other does taxes.

Then there is the 13th Floor page, which has dozens of interesting links interspersed with a few short posts. This one, pondering the fate of New York City should Bloomberg resign to run for office, is intriguing:

As the Bloomberg for President speculation reached Fred Thompson levels of hysteria over the past few days, it dawned on me that I had no idea who takes over if the mayor of New York City leaves office early.

The same question dawned on the New York Times, which offers the answer: Public Advocate Betsy Gotbaum. As the Times explains, the city rules for special elections are a bit murky, so it’s unclear whether she would serve out the rest of Bloomberg’s term, which ends in January 2010.

Gotbaum, 68, is a veteran of city government who keeps a low profile. She would be a notable mayor for a couple of reasons beyond, you know, running a city of 8 million people. She’d be New York City’s first Democratic mayor in 15 years and the only woman nationwide in charge of a city of a million or more people, unless a woman wins elsewhere between now and then (Dallas’ Laura Miller is leaving office).

Her tenure also might prompt someone to write, “Gotbaum governs Gotham.” Say that five times fast.

– – – – – – – – – –
As I said, this is a good site. It’s going on my list of magazines to buy, just because it’s so educational and entertaining. I’ll put it after The Claremont Review, though. That is definitely my next one in the reading budget. It describes itself this way:

The Claremont Review of Books offers bold arguments for a reinvigorated conservatism, which draws upon the timeless principles of the American Founding and applies them to the moral and political problems we face today. By engaging policy at the level of ideas, the CRB aims to reawaken in American politics a statesmanship and citizenship worthy of our noblest political traditions.

My kind of thinkers…as in Charles Kesler’s this month,“Iraq and the Neoconservatives”. Here’s a small snip of a wide-ranging essay:

the early neocons were cultural pessimists. They warned that capitalism and democracy were both drawing down the inherited cultural capital on which they depended; and neither capitalism nor democracy seemed capable of adding to that dwindling stock. They feared that bourgeois America, capable still of bourgeois virtues, was steadily losing ground to the bohemian, relativist America of the intellectuals. Robert Bork’s Slouching Towards Gomorrah: Modern Liberalism and American Decline (1996) is a reliable, if extreme, version of their pessimism.

But a strange thing happened on the way to Gomorrah. In the midst of decline, a resistance and regeneration began to take hold. It started as an intellectual and political revival, led by the mainstream conservative movement, which the neocons have never quite understood or appreciated. It broadened and deepened with the religious revival of the 1970s and 1980s, which helped to turn millions of evangelical Protestants and newly energized Catholics into faithful Republican voters. A religious revival was one of the last things that the neocons would have expected, but it gave them hope for the country. The electoral and policy successes of Reagan Republicanism, to which the neocons contributed in striking ways, confirmed that systemic renewal was possible, after all.

Though they had not anticipated these developments, the neocons easily adjusted to them. As anti-Romantics, they had never let their doubts about liberal society’s viability ripen into an ideology of decline; as Democrats or ex-Democrats, they admired the moderate reform tradition (as they saw it) of 20th-century American liberalism. So individual neocons, mostly in the younger generation, had been advising and aiding politicians all along. The neocons’ long-term pessimism never inhibited their short-term political efforts.

Intellectually, the crucial connection between the neocon generations came in the 1970s, when thinkers like Michael Novak began to argue that bourgeois or democratic culture had greater resources for replenishment than their fellow neocons had realized. Novak argued that far from being parasitic on Protestantism, democratic capitalism was itself a spiritual calling, a Christian mission in which entrepreneurs partook in God’s own graceful creativity. Properly understood, capitalism reinforced Christianity (including Catholicism), and vice versa, though of course neither could be reduced to the other. Richard John Neuhaus and others focused on civil society, the realm of voluntary associations that Tocqueville had long ago pointed to as essential to a healthy democracy. By preventing government from usurping their functions, and by encouraging them in other ways, mediating institutions like churches could thrive, and revivify American culture.

In tracing the connections between culture and politics, neoconservative scholars followed in Tocqueville’s and ultimately Aristotle’s steps: Aristotle’s “regime” was all about how politics shaped culture, and culture politics. For the first generation of neocons, many of whom were sociologists, culture probably seemed the predominant force. The second generation came increasingly to share Aristotle’s confidence in the power of politics to shape culture—and thus of American power to help spread liberal democracy to countries whose culture hitherto had been profoundly inhospitable.

The caliber of writing at The Claremont Institute is unsurpassed.

Meanwhile, the breadth of information at Government.com is equally important. It covers the practical realities of modern governing in the U.S.

3 thoughts on “Governing and Reason”