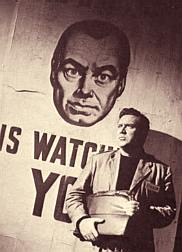 In his essay yesterday, “Resisting 21st Century Communism”, Fjordman examined the emergence of transnational politically correct Multiculturalism, and the parallels between this noxious ideology and Communism, and its origins in 20th-century socialism.

In the comments, Ypp left a series of thesis/antithesis pairs that highlight the fundamental contradictions inherent in Multiculturalism and political correctness.

I’ve reworded and reorganized them a bit, but the list below is still Ypp’s handiwork.

The Ten Antitheses of Political Correctness

Whenever they start by improving something, they finish by depriving people of it.

3 thoughts on “Freedom is Slavery”