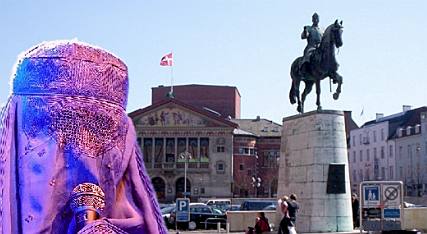 Here’s my translation of an article from today’s edition of the Danish newspaper Ekstra Bladet:

Women who wear the burka will exclude themselves from receiving cash benefits in Århus.

In order to receive cash benefits, one must be available for the jobs market. However, someone who goes about in a burka makes herself unavailable. Nor will the Århus local authority make local jobs available for burka-wearing women, says the councillor. Even so, the Århus local authority has not declared that it will take existing cash benefits from women on the grounds of wearing such clothing, he declares.

“Somene who has chosen this garment has closed many doors for herself, in terms of obtaining employment. She sends a clear signal that she is not in the Danish jobs market, and it is important for me to stay firm, to choose to stand firm on this, that she cannot then receive cash benefits from the Århus local authority,” says Gert Bjerregaard.

5 thoughts on “The Multicultural News From Århus”