Below is another guest essay sent to us by Dimitri K., our Russian correspondent. It’s gratifying to be able to present an account of Russian history from an entirely Russian perspective.

Mr. K.’s opinions about the USSR are his own, and do not necessarily reflect those of Gates of Vienna. I invite readers to treat our guest courteously in the comments — if you want to take issue with what he has to say, I’m certain that he would welcome friendly and constructive criticism.

The Collapse of the USSR
A Figurative Account
by Dimitri K.

There are several different explanations for the sudden collapse of what used to be one of two superpowers of the 20th century. Economists blame the weakness of the Soviet economy. Americans believe it is due to the Afghan war and Ronald Reagan, who called the USSR the “Evil Empire”. Russians blame Mikhail Gorbachev. All those reasons are true to some extent; however, none of them can explain why the country, not too poor and seemingly stable, broke apart so fast. Many countries have experienced worse problems in their history and yet did not collapse. Russians were neither ruthless conquerors nor cruel occupants. Some republics of the USSR had once joined Russia voluntarily for political reasons, other were re-captured by Russians from other empires. Many of those republics were themselves multi-national entities and experienced problems with their own minorities. However, almost nobody doubts the right of those republics to be independent countries, whereas almost everybody claims that USSR was an artificial entity.

Differences in lifestyles were also not the reason for the collapse. Actually, from Ukraine to the Far East, from Lithuania to Georgia, the majority of the population lived a similar life style, understood a common language and did not feel much hatred towards each other. The Soviet Union rather subsidized its European republics than exploited them. Colleges in large cities had reserved vacancies for minorities. I asked my wife, and she argued that the Soviet people existed, because we all had friends of differing national origins and we never had any problems communicating with one another.

And suddenly it all collapsed. The author offers his own explanation, which is figurative but non-contradictory. 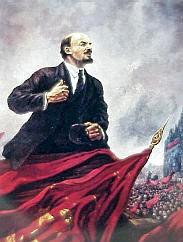 Suppose that the Soviet people really existed. Every people must have its forefather, a symbolic figure from whom the people originates. In Russian it is especially clear, because the Russian equivalents for “forefather”, “family”, “people” and “motherland” all have the same root. The forefather of the Jews was Abraham; other nations probably have similar real or mythical persons in their history. The forefather of the Soviet people was Lenin. It was never stated openly, but it was implied. Children learned poems about the kind and wise “grandfather Lenin”. From songs we knew that we all were the children of the Revolution, and that the Revolution was created (given birth to) by Lenin. Of this point there should be no doubt.

However, there was something unique about the founder of the Soviet people. In 1917 power in Russia was usurped by the radical fraction of the Social-Democrats who called themselves “Bolsheviks”. Almost all leaders of the party, those who had led the Revolution, were later officially called “the enemies of the people”. Their leader, Lenin, was announced to be “eternally alive”. The body that was “eternally alive” lay in the coffin, supposedly imperishable. Who is he, the leader of “the enemies of the people”, lying in the coffin, not dead and not alive? By this description, it can only be a vampire.
– – – – – – – – – –
There are other indications that the Bolsheviks were associated with the revived dead. They called themselves “Red”, and explained that it was because of blood (though did not specify whose blood). The Russian verb that Bolsheviks used for “rebel” is the same as one used for dead coming to life (vosstal). The metaphor of sucking blood was widely used by Bolsheviks — according to them, capitalists used to suck workers’ blood, but the Revolution was supposed to reverse all the injustice done before. Lenin died from a stroke, but a Communist legend said that he was shot by a special kind of bullet. Red fighters struck enemies with sabers, for which they used a synonym suspiciously similar to Russian equivalent of “fangs” (klinki-kliki). That was different from the Russian military tradition of praising the “fine fellow bayonet”; clearly, “fine fellow bayonet” is rather a property of living men, whereas vampires have fangs.

And the final logical conclusion in this theory — a vampire cannot be a forefather, because he cannot be a father. Thus, the Soviet people, supposedly originating from a vampire, could not exist. And the State established by a vampire can be nothing but the “Evil Empire”. It collapsed immediately as soon as collapse became possible, and its inhabitants rushed to leave the empire for less comfortable but more humane national states. Nobody wants to be a descendant of a vampire. The Great Experiment on producing an artificial nation with an eternally but incompletely alive forefather ended in failure. And may it be a lesson for those who want to build a nation: never choose a vampire to be your founding father.

6 thoughts on “The Collapse of the USSR”