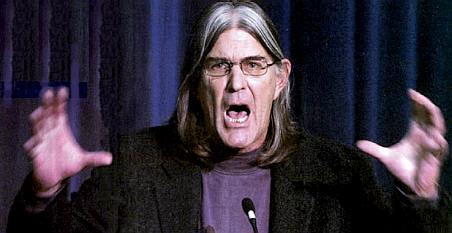 The mills of God the University of Colorado grind slowly, but they’re about to grind Ward Churchill exceedingly fine. The little Eichmann president of his own university has recommended firing the infamous “Native American activist”:

The president of the University of Colorado has recommended that a professor who likened some Sept. 11 victims to a Nazi should be fired, according to the professor and the school.

Ward Churchill, a tenured professor of ethnic studies, has denied the allegations and threatened a lawsuit if he is dismissed.

CU President Hank Brown made the recommendation in a 10-page letter sent to the chair of the committee that handles tenure issues. University spokeswoman Michele McKinney confirmed published reports about the recommendation Monday but said the school would not make the letter public.

The university’s governing Board of Regents would have the final say on whether Churchill is fired or disciplined. It could be several weeks before the case ends up in its hands; the tenure panel must review it first.

Churchill touched off a firestorm with an essay likening some victims in the World Trade Center to Adolf Eichmann, who helped carry out the Holocaust.

Well, naturally he’s going to sue. What else would he do? He doesn’t loathe America enough not to take advantage of its lawyers.
– – – – – – – – – –
Remember: Prof. Churchill isn’t being fired for his obnoxious and disgraceful words — the university asserts his fundamental First Amendment rights to utter such egregious things and still retain his employment at state expense. No, Ward Churchill is being fired because he engaged in a little bit of plagiarism and fraud over the course of his distinguished career.

Strangely enough, DePaul University was not so lenient towards Thomas E. Klocek. As you may remember, he was fired for a single utterance. But Prof. Klocek had the temerity to disrespect the Palestinians. That was enough to cast him into the outer darkness. There are limits to the protections extended by the First Amendment to tenured professors, you know.

Ward Churchill had one thing to say which invited my complete agreement:

“I’ve got more faith in almost anything (than in the university process),” he said. “A random group of homeless people under a bridge would be far more intellectually sound and principled than anything I’ve encountered at the university so far.”

It’s your petard, sir, and I believe that you are hoist.