Fox News has this story:

A grandmother was alarmed to find a condom in a happy meal gift pack bought for her 7-year-old granddaughter at a McDonald’s (MCD) restaurant in New Zealand, local media reported Thursday.

The condom was discovered Tuesday night in a bag that came with Maia Whitaker’s meal, which her grandparents bought at a McDonald’s outlet in the city of Wellington.

Grandpa Rowan Hutch told The Dominion Post newspaper it was lucky his wife was first to look inside the small sports bag that came with the meal.

She was aghast when she found the green condom and its packet inside the bag, he said.

“I was pretty horrified really. The fact my granddaughter was going to look in the bag and find this thing. It would be difficult to explain, she’s only seven,” said Hutch.

The outlet quickly swapped the happy meal for a hamburger and pencil case. McDonald’s is investigating the find.

Spokeswoman Joanna Redfern-Hardisty said because of its popularity, the previous happy meal gift had sold out at the outlet and prepackaged sports bags were substituted as children’s gifts.

For heaven’s sake, what’s the deal? Besides a gleam in the eye of an enterprising lawyer: calling John Edwards…

When I was about ten years old my girlfriend and I found a whole bunch of these on a high shelf in the linen closet. They looked like balloons to us, so we opened the packages and blew them up into various sizes. We drew faces on them and made the Balloon Family. 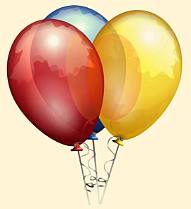 But it was a dumb game: all that Mother Balloon ever did was cook and wash clothes. Daddy Balloon, who sported a pencil thin moustache would open the imaginary front door and call, “Honey! I’m home.” Only the Kid Balloons had any fun.

So we filled the Balloon Family’s heads full of water – this made Dad’s moustache look strange – and dropped them out of the fig tree onto the head of my friend’s older brother. Of course he told on us; we knew because he grabbed two of our water bombs and ran into the house. You could hear her Dad bellowing all the way out to the tree. Tattle tale brothers.
– – – – – – – – – –
Without any need to discuss this emergency, we quickly scrambled off the tree and made ourselves scarce for awhile. What we did was to hightail it to the drugstore and read comic books way in the back, where you couldn’t be seen from the street. When it seemed like enough time had passed for things to have died down, we carefully stacked our reading back on the racks and headed back to her house. I was tempted to go home, but couldn’t bring myself to letting her get in trouble all alone.

Eventually, when we strolled as nonchalantly as possible into the kitchen, the Dad wasn’t around. The Mom was, however, and we got a five star lecture about staying out of the linen closet in the bathroom. “Those were expensive balloons,” she said, and added that we were nosy little kids.

From then on, we never went near that linen closet. No telling what other neat toys were there but it was obvious her parents didn’t share. And with Jimmy around to tell on us…it wasn’t worth living that dangerously.

So get a life, Grandma Hutch. They’re just balloons, for heaven’s sake. Besides, aren’t you suspicious that McDonald’s traded the green balloon for a pencil case? Sounds pretty racy to me.