Cato sent this dispatch from the past. 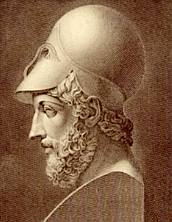 I ran across an interesting speech by Pericles to the Athenian Assembly (according to Thucydides’ history of the Peloponnesian war) which includes the quote below.

I wouldn’t take this too far as a parallel with today’s circumstances; after all, the Athenians lost, and they did some really stupid and sometimes criminal things (like the expedition to Sicily and various massacres).

If Pericles hadn’t died of the plague, they would have lynched him. Nonetheless, the quote seems apposite:

“I know that the spirit which inspires men while they are being persuaded to make war is not always retained in action; that as circumstances change, resolutions change. Yet I see that now as before the same, almost literally the same, counsel is demanded of me; and I put it to those of you who are allowing yourselves to be persuaded, to support the national resolves even in the case of reverses, or to forfeit all credit for their wisdom in the event of success. For sometimes the course of things is as arbitrary as the plans of man; indeed this is why we usually blame chance for whatever does not happen as we expected.”