Steve Decatur is the pseudonym of the blogger who posts at The Islamic Threat. One of his native languages is Arabic, and he is an invalubale translator for the Counterjihad.

To borrow somebody else’s words, I am a ‘genes-only’ Arab. I grew up in the very repressive Islamic Middle East. As a Christian I lived the life of a Dhimmi with very little rights, but always taught that I should be grateful for my abuse and Dhimmi status. In 1991 I broke from the chains of Dhimmitude and came to the US to get my graduate degrees. From the moment that my feet touched this holy land of America I learned to love and cherish its values and everything it stands for. I learned that to be an American is to be brave and free, to speak your mind and to never ever give up. After 9/11 I decided to put these values to use and finally speak up and share with the world what I know about the Islamic world. To my beloved America I dedicate this blog.

Yesterday Steve put up a post about Our Friends the Saudis.

Gates of Vienna has been skeptical from the very beginning about the United States’ alliance with Saudi Arabia. My tendency is to defer to the judgement of the Executive, and assume that there are sound strategic reasons for what seems at face value to be a very lopsided relationship with the Saud dynasty. They supply us with oil at an exorbitant price, and we get… what? “Stability”? Peace in the Middle East? Eternal friendship between the United States and the liberty-loving denizens of the Arabian Peninsula?

Since the accession of the Democrats to congressional power in Washington DC late last year, the Saudis have become even more brazen in their contempt for us, our military, and our way of life. Steve Decatur has posted the video and translated part of a poem recited over official Saudi TV by one of our “friends”: 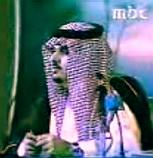 It was hard for me to ignore blogging about the following video. A Saudi poet reciting to a huge audience of Saudis (people who are suppose to be our friends) a poem about Iraq. I will translate most of the poem but it is sufficient to say that in one line he promises America that it will be killed and suffocated in Iraq. (He is referring of course to all the Al Qaida and Sunni insurgents that our Saudi friends so happily finance). The poem includes other features such as embedded promises of the complete annihilation of the American invaders in a fashion similar to how the Muslims annihilated the Mongol invaders in the 12th century.

I thought the last part of the poem about the hugs and all explains a little bit of the Saudi cloak and dagger mentality when it comes to their hypocritical relation with America where they hug [and hold hands] but their intent is to kill and suffocate. The poet must know a thing or two about his government’s current policy which seems to be financing the insurgency in Iraq and making it easy for Al Qaida to get the hands they need to carry out attacks against our troops. The aim of course is to both make sure that Sunnis win the day and also weaken us….

The second thing in this poem, especially given that the poet criticizes the Iraqi hypocrisy, is that the poet Implies that America used Iraq to fleece the gulf countries. That is funny because in 91 the Saudis begged us to protect them from the invading Iraqi hordes.

And a part of the poem:

Go over to The Islamic Threat and read the rest.