I have written before about the problems in India for women. One of them is rough sexual harassment in public, another is the often hazardous dowry arrangements their families enter into. Some in-laws threaten and punish their new daughters-in-law into making their families of origin cough up even more money once the marriage is accomplished.

What lies at the root of all the other problems, however, is female foeticide. I don’t mean primitive, amateur abortions, either. This is the systematic rooting out of female children from the womb as practiced in private clinics in India.

Scroll down that original post to read what The India Times had to say about the problem…an illegal practice, by the way.

Now comes General Electric with its nifty little ultrasound machine, helping in the elimination of hundreds of thousands of girl babies. As the preface quote to this last of four articles on female foeticide reminds us, “A single death is a tragedy; a million deaths is a statistic.”:

Why ultrasound machines? GE spokesmen have repeatedly refused to comment on the matter, but by 2000, according to www.gehealthcare.com, Wipro-GE had shipped out 6,500 of the machines in India. Wipro’s Web site, www.wiprocorporate.com, claims it pioneered the manufacture of ultrasound equipment for India. 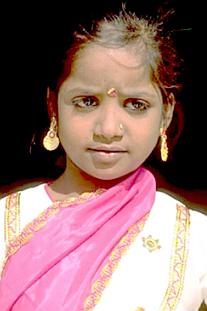 GE’s latest portable machine is the Logiq 100 model. Its American equivalent, the Logiq Book XP, sells for $16,900 new or $11,000 refurbished, according to the sales department at National Ultrasound, an American distributor based in Duluth, Ga.

Indian activists who oppose the widespread abortion of female fetuses say GE is among a handful of companies that manufacture the machines for the Indian market.

Under Indian law, doctors operating ultrasound machines must fill out forms showing the reason for each procedure, which is permitted only in the case of an abnormal pregnancy. But the government can only monitor the 25,770 machines that have been officially registered.

The actual number of machines is estimated at anywhere from 70,000 — by the London Daily Mail — to 100,000, according to the British Medical Journal. The portable ones end up in rural areas, where technology makes it possible for any woman to determine the sex of her child. The fetus can then be terminated at a government hospital, where abortions, like other procedures, are free for those who cannot pay.

Sabu George, a New Delhi activist who in 2000 filed a lawsuit against the government for failing to enforce its own laws against female feticide, said findings have revealed a disproportionate number of GE machines in northwest India, which has the lowest proportion of females to males.

Vimochana [is] a women’s rights group…

Its leader, Donna Fernandes, blames doctors for India’s soaring male-female imbalance. “Doctors are a bunch of criminals,” she said, “but no one wants to see them as such. They are a powerful class, economically and politically.”

Although India has a well-established law forbidding doctors from telling women the sex of their unborn child, few physicians will turn in a guilty colleague. “It is,” Mrs. Fernandes said, “like setting a trap for a rat to catch another rat.”

“Female feticide,” the Indian term for the abortions of millions of baby girls over the past few decades, is a $100 million industry.

Although India’s prime minister, Manmohan Singh, termed female feticide an “unacceptable” crime in a press conference last summer, his own culture stands against him. One 1987 study by the Federation of Obstetricians’ and Gynecologists’ Societies of India showed that out of 8,000 abortions, 7,999 occurred after tests showed a female fetus.

A University of Bombay study done about the same time by professor R.P. Ravindra showed that out of 1,000 cases in Bombay, he could not find a single case of a male fetus being aborted. Ninety-seven percent of the aborted fetuses were female and the other 3 percent were of undetermined sex. [my emphasis —D]

This is cold-blooded cultural murder. It is going to bring down India’s soul if something is not done.

You and I cannot go to India. But we know where General Electric lives, don’t we? They ought to be reprimanded for breaking the law in India (something the government there has done, but our State Department, if it had a conscience, could easily make this a no-go place for GE.

I’m going to email the White House and my congressional representative. I’m even going to try my state senators. You can get your state’s information here.

Meanwhile, here are the three previous articles in this series from The Washington Times on the plight of women in India:

India’s Imbalance of Sexes:
“Raising a daughter is like watering your neighbor’s garden.” — Punjabi saying

Brides Bound by Tradition:
“May you be the mother of a hundred sons” — a Sanskrit blessing

Lots of Stings, No Pain:
“In childhood a female must be subject to her father, in youth to her husband, when her lord is dead to her sons; a woman must never be independent.” — Verse 5:148 in the Hindu laws of Manu

This story is old. It is shameful. It stinks.

And combined with China’s similar cultural preference for boys, the future does not bode well for women in either place. This kind of manipulative choice on an individual family level is the perfect example of truly dangerous portents for the future of our children, who will be subject to the world-wide pressures brought on by “stinking thinking.” The vaunted wisdom of India is absent here.

As Mark Steyn would say, it’s the demographics, stupid. And in our shrunken globe, the stupid things that behemoths like India and China do affect us all… for generations, and in ways that we cannot completely foretell.

Algore, Inc. should be chasing after the very real problem of female foeticide and what it means for our future instead of conjuring up environmental phantasms. But it wouldn’t get him any votes or movies, would it?

The resounding silence you hear from the Abortions R Us crowd in this country is to be expected. Long ago they sold their souls for political power; you might as well talk to the wall as ask them to speak up regarding this hideous crime against women. So far, their social conscience appears to stop at their own nose. Hey, it’s abortion, and abortion trumps everything, right? It trumps common sense, medical ethics, and women’s health… just to name three.

5 thoughts on “The Killing Fields of India”