The object of life is not to be on the side of the majority but to escape finding oneself in the ranks of the insane. – Marcus Aurelius 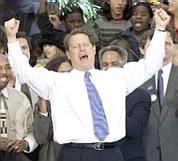 Meanwhile, the Newsbuster’s essay is most encouraging. Enough to put some shine on your Monday. Who would have thought Algore’s hallucinations would have jumped the shark so soon after his glorious Hollywood appearance? Not I. Surely this Henny-Penny-the-sky-is-falling scare-mongering had several more months of slavering media attention due?

– – – – – – – – – –
Apparently not. The gods of Journalism, pronouncing from Mt. New York Times, have decided – for their own [currently] inscrutable reasons – that Algore’s theories need a brake. Here, Noel Sheppard hat tips Drudge for the report:

Question: When you’re a liberal, how do you know if you’re on thin ice, especially the kind that you’re claiming is melting all over the planet due to global warming?

Answer: When even papers like the New York Times are publishing articles skeptical of the junk science you’ve been peddling across the questionably warming globe.

Sure, soon-to-be-Dr. Gore has kind of won an Oscar for his schlockumentary “An Inconvenient Truth,” even though all he got to take home that evening was Tipper and all the food she was able to stuff into her pocketbook at the buffets thrown in his honor.

However, it must have been a quite shock to find out that the leftists working for Punch Sulzberger were going to publish a not so adoring article after all that oohing and aahing Gore received from the Hollywood elites just days prior…

Sympathy aside, it is amazing that the gods have turned their gaze from Algore so soon.

What goes here? Who is going to be propped up in his stead? Obviously, they are dethroning AG, but in preparation for whose coronation?

Bad science on the environment has wafted from the pages of the NYT since the 1970’s. Why this sudden conversion to reality?

Stay tuned. The Times could get interesting.

7 thoughts on “The Capricious gods on Mount Journalism”