Our Swedish correspondent LN sent me a link to a Norwegian web page featuring a new song by the singer Åge Aleksandersen. LN translated only the song lyrics for me, and based on those I thought the song had to be a spoof, an ironic and deadpan takeoff on Norwegian dhimmitude. 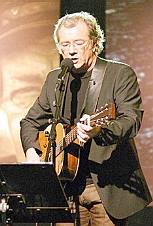 So I wrote to Kepiblanc (who reads Norwegian), and asked him what he though of Åge Aleksandersen’s song. Here’s what he replied:

Sorry to say, Baron: this guy is a 112% moron. He is dead serious and wants to embrace Muslims, no matter what. If you have the text, you know how abominable this is.

As Steen says: Norway is in serious shortage of psychiatric wards.

I asked Kepiblanc to translate anything else on the page that seemed pertinent, and he kindly agreed to. But first, here are the song lyrics:

“Reaching out a hand for Islam”

The page is from Norwegian Broadcasting Corporation (NRK — Norsk Riks Kringkastning). The caption under the photo reads:

He has sold more than 1.5 million albums since his debut in 1972. This is his thirtieth anniversary as a soloist. Today Åge Aleksandersen finishes his twenty-first album, “Two Steps Forward”.

An excerpt from the article itself:

Wants to befriend the Muslims of the world

This time it’s a mature Åge Aleksandersen stepping forward with his lyrics. In one of his songs “Æ vil vær din venn” [I want to be your friend] he tries to explore his tolerant attitude towards Islam.

“This is about a love so encompassing that it can’t go any further,” says Åge Aleksandersen.

“At the intersection between Islam and Christendom, it is a colossal challenge to me to remain open and try to see the good in all people.”

“I have worked with this text for three or four years. One word here, one word there. Meticulously, I tried to compose a song that tells something essential about my feelings and how complicated I find them. I am prepared to go out of my way in order to reach out to those on ‘the other side’.”

“It probably won’t be a hit,” Åge Aleksandersen sighs.

“During those three or four years when you struggled with this text, a lot of things happened to the relationship between Islam and The West. We waged war against them, not once but twice. A backdrop when you wrote this song, perhaps?”

“Yes, this song is my safety valve. It’s where I can let off steam. Explore in detail. Proclaim how I perceive this.”

Kepiblanc supplies us with some additional commentary:

The rest of the article is just the usual babble about popularity, chit-chat, and promotional platitudes.

Baron, I can assure you: there’s no irony at play here. This is NRK at its worst. Norwegian political correctness and dhimmitude gone ballistic. And NRK — just like the Norwegian Government — doesn’t even know the words “irony” or “sarcasm”.

Funny thing is, the song is in Nynorsk [New Norwegian], an artificial, constructed dialect invented to protest the dominant Bokmål [Book Language] — essentially Danish. Nynorsk took some remote dialects from isolated valleys, tossed them in a melting pot and came up with a dialect almost indistinguishable from my childhood dialect of South-Jutlandish [Old Anglo-Saxon]. Talk about irony…

After reading — and translating into Danglish — this nonsense I urgently need a beer or five, be it early morning or not. It saddens me immensely to see good, old Norge going down the drain.

How about a very wet “Norge’s Wake” here at Gates of Copenhagen?

I’ll take him up on that, and raise a virtual mug of Mørkt Hvidtøl to the Vikings, the fjords, and the Old Norse who are no longer among us!

By the way — when Kepiblanc refers to “Danglish”, he is employing my term for the dialect our Danish volunteers use when they translate an article from their native Dansk (or from Norsk or Svensk) for Gates of Vienna. Danglish differs from Standard English mostly in the spelling, the punctuation — Danish has different conventions about the use of commas — and the word order. When I receive a an article in Danglish, I make the minor modifications required to put the translation into Standard English.

And Kepiblanc is being modest — his English is virtually flawless, as is that of several of our other translators.

Come on all you Muslim dudes — you gonna get love…