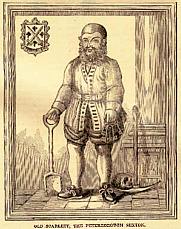 I nagged the Baron for quite awhile to put up a Digg link at the bottom of our posts. After much grumbling (he’s cute, but he grumbles), he finally faced the inevitable and got the necessary tag to put up. As it turned out though, he uses the site much more than I do. On occasion, he will come downstairs to tell me what is being linked, or laughing at one of the comments. For example, look at this one today from a sniffily dismissive “erikfm 49.” (the number in his nic may refer to his IQ):

Gates of Vienna is a wannabe Littlegreenfootballs hate site. Needs to be buried whenever it appears on dig.

Oh my heavens! Someone out there thinks we are an LGF imitator! Surely they jest? I’m not about to jump on a bike and ride for hours, and my geekiness extends to a passing acquaintance with html. Though now that I think of it, all my husbands (two) and two thirds of my sons are (or were) in the computer biz. I can count on family meals where much of the conversation will be in some geeky language that I will never speak or understand. And my daughter-in-law is one of them, too.

Unlike Charles Johnson my idea of exercise is gardening or using a rebounder, or chasing the Baron around the house — usually with a “to-do” list in my hand. Or, on my less-than-optimum days, lying in bed reading British crime novels, and waiting for the Black Dog to leave. He can be a persistent mutt sometimes.

But get on one of those fancy-Dan bicycles like Charles rides every day for miles and miles? No way, Jose. No bike for me unless they have balloon tires and “braking” is accomplished by the simple means of pedaling backwards. As for gearshifts, they belong in fun cars that ride low to the ground, definitely not on bikes, thankyouverymuch. A few years ago on our summer vacation we stayed on Ocracoke Island (a favorite haunt of the Baron and his college friends long before I knew them); during our stay we rented bicycles. These were “real” bikes: good old balloon tires for riding around on the very flat land of that barrier island [this was before my appointment with the fig tree, and both my knees worked well. Thus I had great fun pedaling around].

You stone your mom, whip your sis, mutilate your kid; but be my friend

Our Swedish correspondent LN sent me a link to a Norwegian web page featuring a new song by the singer Åge Aleksandersen. LN translated only the song lyrics for me, and based on those I thought the song had to be a spoof, an ironic and deadpan takeoff on Norwegian dhimmitude. So I wrote to Kepiblanc … and asked him what he thought…

There were a few friendly comments, and then the gnome showed up, dragging LGF behind him. I suppose in certain circles (or octagons, maybe) covering some of the same material Charles does, and being committed — as he is — to preventing the dhimmification of the United States while making fun of the hypersensitivity of some denominations of Muslims….I suppose that gives us similarities.

But in truth, our godfather was Wretchard. It was where we spent our time commenting when we discovered blogs, and his often brilliant analyses would turn the kaleidoscope just a bit, allowing us to see things in a new light. Wretchard’s insights created a whole new world for me and the Baron, a world we have inhabited ever since.

Thanks to Charles’ indefatigable output — helped in part by his many, many fans — he is the go-to-guy for information on the strange and outrageous doings of both the beheaders in the world and of the fifth column sneaking around in this country. Little Green Footballs is the pulse of the conservative, patriotic regular folks who refuse to take seriously the nonsense spouted by the incestuous MSM-academonia-political connections that work so hard to keep a lid on the conversation in this country. Charles is an un-maker, his efforts are a crucial component in keeping the flame alive.

That is why Charles Johnson and Little Green Footballs are despicable in the eyes of the pretentious. The fearful pretentious, I might add, since they cannot bear to hear through even a sentence of those who disagree with their Utopian, socialist hallucinations. They put their hands over their ears and hum loudly in order to keep the scary truth at bay.

Imagine what Vietnam might have been had there been an internet and a Charles Johnson in that generation? Our nation would be on course now. Nancy Pelosi would be an anonymous grandmother living somewhere besides Washington, D.C. The moonbat left would be… well, it might not be period, at least in any meaningful sense. And George Soros would be known for what he is: a destablizer of countries, whose hunger for power is pathological greed.

No, Gates of Vienna is not an LGF wannabe, but thanks for the compliment what’s-your-name 49. However, if you knew us at all, you’d see we’re descended from The Belmont Club, so you’re not even close.

Now maybe a meander over to LGF is in order, just to see what I can steal…