Five Bulgarian nurses and a Palestinian doctor languish in a Libyan prison, a sentence of death hanging over them. They’ve been there for eight years now, subject to torture and privation. The doctor’s injuries are such that even if he is ever set free, he will no longer be able to practice medicine.

This is not a new story. It has been covered widely on both sides of the blogospheric divide. Interestingly, this is one case when the liberal and conservative factions are in agreement: these people are being held on trumped-up charges, for purposes of revenge and an exactment of tribute. In fact, America has been dealing with “the shores of Tripoli” since her very beginnings. Definitely this is merely another phase of an ancient enmity. I hope to make the case that even though the country most vitally and hurtfully involved at the moment is Bulgaria, the USA figures largely in the background. Demon America.

Gates of Vienna hasn’t covered this story much. The Baron posted briefly on it back in December, and we discussed it on occasion as the various “trials” dragged through what passes for jurisprudence in the despotic nightmare Colonel Muammar al-Ghaddafi has built. Then, yesterday, a doctor in the Middle East emailed us, asking that we look at some links about what Bulgaria is doing to ease its national pain. 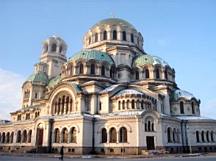 The website’s English portal lays out plans for a national demonstration, beginning in Sophia and centering on St. Alexander Nevsky Cathedral. Under the aegis of three leading Bulgarian MSM members, a campaign called “You Are Not Alone” will allow what has been a low-level movement to synergize. It will become something more akin to solidarity with their suffering fellow citizens, imprisoned unjustly, grossly mistreated, and so far from home. The movement has a name, a ribbon, and a national song, all bearing that same title: “You Are Not Alone” [we hope to find a clip of the music. Many of the foremost singers, across a wide spectrum of genres, have contributed performances for this. It is a recognition that music has the power to heal, to bring people together, and to provide the necessary spirit to overcome injustice].

I spent a long time looking at the various strands in this story, curious as to what had transpired to bring about the end result: those innocent nurses now condemned to death. Or at least with Damocles’ sword hanging over them. Normally I avoid in-depth reports on such events. They seem too opaque, too hopeless, too full of cynical manipulation to dwell on very much. But, as the case of Nazanin in Iran proves, international pressure can be effective. Besides, the doctor’s plea to look at the story overcame my reluctance.

This is a large story with many players and it ventures into areas where Gates of Vienna has little or no expertise. However, it is my hope that our many knowledgeable readers will arrive to fill in the blanks, to modify the existing information, or to contradict what we think with verifiable fact. I will simply be presenting what I was able to find prior to the deadline for posting this story before the big demonstration in Sophia tomorrow (February 9th).
– – – – – – – – – –
First of all, the story needs some context. We are sure of certain conclusions; some of our surmises are based on partial information. And in the end there is more than one villain – i.e., not just Colonel Muammar al-Ghaddafi – and at least a few cynical operators. When we finish, there will be unanswered questions. I hope they spur all of us on to find some practical solutions.

Let’s go back twenty two years to 1985. That’s when Libya was accused of sponsoring the attacks on the airports in Rome and Vienna. As you can see, the Colonel and his cronies have been at this a long time. They’re good at it. From there, we can follow the trail of events that enmeshed six medical personnel in a hellhole thirteen years later:

Three weeks later, in April, a disco in Berlin was bombed, killing three people and wounding two hundred. Two of the fatalities were American servicemen. The US obtained information that Libyan agents in East Germany were behind the attacks.

There was sporadic biteback: two British hostages held by the Abu Nidal Group in Lebanon were hanged; an American journalist in Jerusalem was assassinated.

1987-88: Things quieted down some. The Colonel had to quell some internal mutiny — problems he blamed on the US. Who knows? Our intelligence services may well have been behind the unrest. But it was also a period in which Ghaddafi was busy increasing his arms shipments to international terrorist groups. The provisional IRA in Northern Ireland was grateful for his help.

Then came December 21, 1988 and the Pan Am Lockerbie disaster. Eventually it was seen as an attack on the USA, since 189 of the 270 dead were American citizens headed home for the Christmas holidays.

1991: Indictments for murder were issued on November 13, 1991, against Abdelbaset Ali Mohmed Al Megrahi, a Libyan intelligence officer and the head of security for Libyan Arab Airlines (LAA), and Al Amin Khalifa Fhimah, the LAA station manager in Luqa Airport, Malta.

1999: After protracted negotiations and UN sanctions against Libya, Ghaddafi handed over the two accused.

2001: Abdelbaset Ali Mohmed Al Megrahi was found guilty and sentenced to twenty seven years in prison. His co-defendant was acquitted and returned to Libya.

That, briefly, is the chronology of the hostilities: Libya vs. the civilized world, and America in particular. Much detail has been omitted, but is widely available elsewhere, including the embellishment supplied by all the conspiracy theorists.

What the timeline does is establish some of Ghaddafi’s possible motives for imprisoning the Bulgarian nurses. Notice that this event took place in 1998, before he turned over al Megrahi to stand trial. And the nurses were taken fully three years before he formally accepted his financial compensation to the families of the 270 dead in the Lockerbie disaster. Even in 1998, he must have known his intelligence officer was going down for the count. Perhaps this move against the nurses was his preparation for that event.

According to the film Injection, Ghaddafi tried several other gambits before settling on the Bulgarian nurses. One Hungarian nurse was imprisoned and then let go. Some Filipina nurses were also detained and then released. Next, he took Polish nurses – one of whom “accidentally” fell six stories to her death. The rest were let go. Finally thirty-eight Bulgarian health workers were detained. Eventually, all were released except for the five nurses currently in prison, and the Palestinian doctor.

They are still there. And now their fellow citizens are rising to the occasion. The demonstrations will begin in just a few hours. Who knows what will develop from the experience, what national spirit will evolve to aid in the release of these women?

Meanwhile, there are many unanswered questions about the spread of the AIDS virus in the Children’s Hospital where they worked. Not only questions about the particularly virulent strain which infected children admitted there, but how it was transmitted so quickly and so prevalently.

7 thoughts on ““You Are Not Alone”… Any Longer”