Before we get into the meat of this post, I’d like to offer special thanks to our Danish friend Kepiblanc, who has been doing such magnificent journeywork in the last few months translating for Gates of Vienna. He not only translates from his native Danish, but also from Swedish, Norwegian, German, and French when the occasion warrants and/or the mood strikes him. He’s like a babelfish translation automaton, except that the resulting English is fluent and makes complete sense!

So let’s hear a round of Gates of Vienna applause for Kepiblanc. 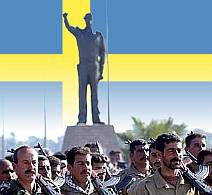 This article (translated by Kepiblanc) is from the Swedish blog kulturrevolution.se, and concerns the growing Iraqi criminal networks in Sweden.

The Iraq war prompted an exodus of thugs and criminals from Iraq, particularly those who had previously been employed by Saddam’s Mukhabarat. According to Brynte Cronsköld — who is a Crime Inspector with the Swedish Customs Service — the shrewd Baathist refugees have learned to game Sweden’s asylum system, as so many questionable Third World “refugees” have done before them.

On February 14th Carl-Robert Lindgren wrote about the extensive forgery of passports practiced by the Iraqi embassy during recent years, and the indifference of Swedish authorities towards it. In and of itself it is serious enough, though hardly surprising, given the present state of affairs in Iraq and Sweden.

Hiding behind this is something that is very disturbing from the perspective of law enforcement. Given the enormous influx into Sweden of Iraqis carrying fake ID documents, all indications point to a repetition of the disastrous mistakes made during the early nineties. When Yugoslavia fell apart, a lot of people came to Sweden and were given residence permits. Within this stream of refugees we received a substantial portion of Tito’s Security Service with all the attendant consequences. Without any doubt they arrived with faked papers and — just as happens today — there were no obstacles to getting a permanent residence permit, even though Swedish Security, the military, the Customs Service, and police were very well aware of those people’s true identity. Some of them should rightfully face a War Crimes Tribunal — which explains some of the brutality we’ve seen in the criminal underground during the latest fifteen years.

With their experience, know-how, and contacts, they very quickly established themselves within organized crime. What this means became evident when Customs noticed their expert trafficking in drug, weapons, liquor, and cigarettes. More than a decade later the problems remain unresolved. To the contrary, Yugoslav criminals are now so deeply embedded in Swedish society that the problem is impossible to cure. Some agencies (police, customs etc.) actually tried to stop them, while others (immigration, courts, lawyers) helped and protected them by handing out citizenships like RFSU [Swedish Birth and Prevention Council — translator.] hands out condoms. If some of those key criminal actors disappeared from time to time it was solely due to mutual intramural killings, rather than Swedish law enforcement.

Now, with Iraq falling apart, history repeats itself. Parts of the old regime’s security apparatus — and not a very nice part at that, even compared with other dictatorships — have already arrived. Nobody should maintain the illusion that new criminal networks are not under construction and that Swedish authorities don’t know about it. All this could have been avoided had we demanded valid passports and revoked the Iraqi embassy’s permission to issue them, at least for the time being. In reality the distribution of passports has been an incubator for serious crime and terrorism throughout the Western world, and it’s a disgrace that Sweden has let it happen.

Within this organized crime there are other forces besides pure greed. Ethnic, cultural and — not least — religious factors contribute dynamics that are incomprehensible to Swedes, and unmanageable by law enforcement authorities. We will have to live with the consequences of this for decades.