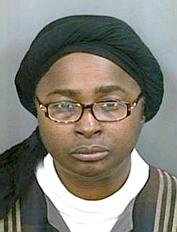 Khadijah Ghafur is a follower of Sheikh Gilani, the Pakistani founder of the Muslims of America and Jamaat ul-Fuqra. She herself established the Jamaat ul-Fuqra compound known as “Baladullah” in rural California. Last August a California Superior Court judge sentenced her to fourteen years in prison for embezzling money from a chain of charter schools that she established.

It was a classic Fuqra operation — scam the government for a lot of cash, and then use it… for what?

The Mercury News has been investigating that exact question:

Where did the money go?

The answer could lie in evidence never introduced in court. The Mercury News has learned of several overseas fund transfers, a mysterious letter and a web of connections between Ghafur and an obscure Pakistani cleric known as Sheikh Syed Mubarik Ali Gilani.

Supporters say Gilani is a charitable teacher and spiritual leader who promotes self-improvement. But over the years, state and federal authorities have described him as the head of an international terrorist group who draws financial support from followers in the United States.

Ghafur, the community’s matriarch, had lofty ideas and a knack for getting people to embrace them. She impressed Fresno school officials in 1998 with her plans for a charter school serving low-income families.

California was then in the vanguard of a national movement. New rules opened the door for community groups to create schools and operate them with public funds.

“We all wanted to believe in what they were doing, what they said they intended to do,” said Marilyn Shepherd, then-director of charter schools with the Fresno district.

Ghafur opened the first Gateway Academy charter school in Fresno in 2000. There was another campus housed in a ramshackle building at Baladullah.

In less than a year, Ghafur had built an empire of a dozen campuses around the state, mostly by affiliating with existing private schools. In official documents, Gateway projected a 2001-02 enrollment of 1,400 students.

The number would never reach more than half that.

Fresno school district officials, meanwhile, were becoming concerned. A Gateway campus had reported 100 percent attendance — a rarity at any school — on a day when Shepherd visited and found the classrooms closed. Gateway also was reporting an unexplained operating deficit of $1.3 million. Fresno officials asked the state Department of Justice for help.

The assignment went to Special Agent Thomas Win, a veteran white-collar crime investigator based in Fresno. Win, 46, is genial and intensely focused, the kind of cop who favors Hawaiian shirts on his own time but wears a crisp suit and tie to work. It didn’t take him long to discover that Ghafur had 29 bank accounts. To him, the sheer number signaled that someone might be moving money around surreptitiously.

Poring through records with a forensic accountant, Win found evidence that Ghafur used money from the school to repay debts, including loans for the purchase of Baladullah and other property.

The evidence would persuade a jury in July 2006 to convict Ghafur on 13 counts of grand theft, misappropriation, fraud and tax evasion.

But there was a lot more money unaccounted for.

The number of accounts and the flow of money made Win suspect “structuring” — an illegal ploy to move large sums without detection, by keeping individual transactions below $10,000, the minimum level before banks must report to the federal government.

But it was the destination that raised Win’s eyebrows. Ghafur had transferred the money to her husband, Salih Ghafur, in Islamabad, Pakistan.

Anyone who studies Sheikh Gilani notices that the man likes money. Lots of it. According to sources, members of Jamaat ul-Fuqra are required to send thirty percent of their income to their spiritual master in Pakistan. Tithing is not good enough for the sheikh!

Sheikh Gilani also has a thriving online business selling his tapes and books, complete with Paypal and shopping carts.

So what does he use all that money for?

Analysts who study the Alice in Wonderland world of Pakistani extremist groups say Gilani has supported Muslim insurgents in the disputed Chinese-Pakistani-Indian region of Kashmir. In recruiting videos from the 1980s, seized by authorities, Gilani boasted that he provided “highly specialized training in guerrilla warfare” and encouraged anyone interested in joining to contact the Muslims of the Americas.

Which brings us right back to Charlotte County, Virginia, and the Muslims of America compound in Red House. This part might sound familiar to the people of Charlotte County:

Baladullah wasn’t just a residential enclave, though about 100 men, women and children lived there in mobile homes. It’s unclear whether everyone there was a Gilani follower, and some would later deny that Baladullah was officially connected to Gilani. But a sign out front announced it was also a campus of International Qur’anic Open University, the educational arm of Gilani’s movement.

Although the nearest neighbor was miles away, the property was surrounded by a fence and occasionally guarded by young men with guns.

Regular readers of this blog know this setup. It’s the standard modus operandi for Jamaat ul-Fuqra.

Here are some words about Sheikh Gilani’s people that the Charlotte County Board of Supervisors might want to ponder:

In an internal planning document, the Department of Homeland Security listed Jamaat ul-Fuqra in 2005 among a handful of U.S.-based Islamist organizations that “require continued monitoring.”

The document, first disclosed by Congressional Quarterly, said Ul-Fuqra has 1,000 to 3,000 members and “continues to conceal its activities and prepare itself for a possible confrontation with U.S. authorities.” [emphasis added]

The leader of this group has a road named after him in Charlotte County. The Board of Supervisors voted last week to affirm that name and retain it on the county road sign.

The Sheikh lives well enough on his American cash cow. But he has other uses for the money as well:

“It is very clear” that Gilani gets money from his American followers “for supporting Kashmiri militants and establishing the network of the Qur’anic University,” said Mohammad Amir Rana, who tracks extremist groups for a Lahore think tank, the Pakistan Institute for Peace Studies.

So the money trail leads from the pockets of American taxpayers through the members of Jamaat ul-Fuqra in the United States into the hawala network and eventually gets to Sheikh Gilani in Pakistan, where it is put to good use slaughtering infidels in Kashmir. Blowing up buses and schools. Kidnapping. Massacring entire villages. Ethnic cleansing.