Well, as “regular” as things ever get around here.

Thanks for all the comments and the emails during our weather crisis.

I want to reassure those who were worried about using an unvented kerosene heater — yes, you’re right to be concerned. However, we opened doors frequently enough let oxygen in and were never in danger of carbon monoxide poisoning. As leaky as this old house is, I’m not sure we even needed to do that, but just to be on the safe side…it was an “open-door-frequently” policy. Now that the heat pump is up and running all we have to do is wait for that kerosene odor to fade.

It was fun “roughing it” for awhile — though I kept thinking of people around the world who would consider our privation a great luxury.

For those who asked: no, we don’t have a fireplace. The rooms are too small for that to be practical. And yes, we’d love a generator — especially the kind the electric company installs and upkeeps since neither of us is mechanically inclined. As the Baron says, he can do anything that requires brains and no skill. 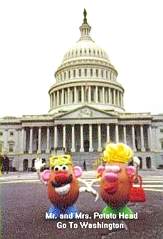 Meanwhile, try the presidential straw poll at Pajama Media. I’ll have to admit I don’t even know all the contenders. For example, who is Duncan Hunter?? And some of the contestants on the Dem side are quixotic, to say the least. Dennis Kucinich comes to mind. Perhaps hope springs eternal? Or maybe there are enough people far enough to the left cliff willing to vote for him? If that is so, it makes me wonder why Patrick Buchanan is not in the lists.

As it turns out, some people are attempting to stuff the ballot box on this little venture. How dumb can you get? Are people really ignorant enough to think an IP address can’t be recognized? Lord love a duck, there are some straaange folks out there.

Admittedly, most people who visit PJ Media to look at the news items are on the right side of the aisle. But the advantage to the PJ poll is that you get to vote on both parties.

Wouldn’t that be fun in real life? I think it would bring out the devil in some voters and we’d wind up with some oddball winners. One from Column A and one from Column B would definitely be a recipe for political entertainment. Our political “parties” need some rejuvenation — why not this one? Of course, we’d wind up with an executive branch that resembled Mr. Potato Head, but that can’t be much worse than it’s been for the last sixteen years.

Think of it: Hillary and Rudy ruling together, with Bill trying to keep them from killing each other. The possible combinations boggle the mind.

How about Barack Obama and Newt Gingrich? No?

The mutations and permutations are fascinating, but meanwhile ugly reality will have its way and we’ll all have to hold our noses and vote. Or stay home.

5 thoughts on “Now Back to Our Regular Programming”