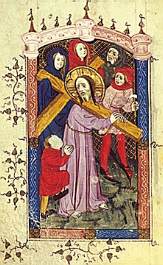 The other night at the Charlotte Courthouse demonstration I engaged in a lengthy discussion — well, an argument, really — with a Presybterian minister. I’ll call him “The Rev”, since I never caught his name.

The Rev counts among his friends a number of residents of the Jamaat ul-Fuqra compound in Red House, and he thinks that they are being unfairly maligned when we associate them with terrorism.

I pointed out that their founder and leader, Sheikh Gilani, is on record as supporting violent Jihad against Americans, and that members of the group have been convicted of murder, attempted murder, conspiracy, fraud, and firearms violations, among other things.

But it was his contention that such things had nothing to do with the people in the Red House compound. I got the feeling that he considered the Muslims of America to be a big-tent organization, with room for peaceful Muslims here and terrorists there, a group that has something for everyone — with the possible exceptions of homosexuals and pig farmers, of course.

He has worshipped with these folks, taken meals with them, and coached their children. He knows that they are good people, and that they came to Red House so that they could practice their faith in peace. He said that it was wrong for me to judge people whom I have never even met.

I told him about some of the history of the Red House Compound — its use as a safe house for fugitive felons, the firearms stockpiling and subsequent arrests — but he waved that away impatiently. “You haven’t even met these people,” he said. “How can you justify going around spreading all this fear?”

Another participant in the discussion pointed out that the Koran explicitly prescribes violence against non-believers. This made The Rev especially voluble.

“Christianity has had its share of violence! The Bible has its own violent verses — ‘dash the babies’ heads to pieces’ and so on.

“Christ’s message to us is that we must love one another, and that love includes our Muslim brothers and sisters. This attitude of suspicion and hate is what’s wrong with the world today.”

Though he may flourish among his brothers, the east wind, the wind of the LORD, shall come, rising from the wilderness, and his fountain shall dry up; his spring shall be parched; it shall strip his treasury of every precious thing. Samaria shall bear her guilt, because she has rebelled against her God; they shall fall by the sword; their little ones shall be dashed in pieces, and their pregnant women ripped open.

Whoever is found will be thrust through, and whoever is caught will fall by the sword. Their infants will be dashed in pieces before their eyes; their houses will be plundered and their wives ravished.

For additional violence, consider the peculiar revenge that Elisha took on the obnoxious little boys, from 2 Kings 2:23-24:

Then he [Elisha] went up from there to Bethel; and as he was going up by the way, young lads came out from the city and mocked him and said to him, “Go up, you baldhead; go up, you baldhead!” When he looked behind him and saw them, he cursed them in the name of the LORD. Then two female bears came out of the woods and tore up forty-two lads of their number.

You have to really comb through the New Testament to find anything violent (except for the violence that was directed against Christians by their persecutors, of course).

The verse that is most often cited in this regard is Matthew 10:34:

But only a superficial reading would take this to be a prescription for violence. The next two verses make it clear that Christ was predicting internecine — even intra-family — conflict between those who believed in him and those who didn’t:

The Koran, on the other hand, is rife with violent passages. Yoel Natan has compiled a selection of 164 verses explicitly directing the believer to wage violent jihad against the infidel. And those are just from the Koran itself, and not from the Hadith or the Sunna.

2:190-191 …fight in the way of Allah with those who fight with you… And kill them wherever you find them, and drive them out from whence they drove you out, and persecution is severer than slaughter, and do not fight with them at the Sacred Mosque until they fight with you in it, but if they do fight you, then slay them; such is the recompense of the unbelievers.

8:12 When your Lord revealed to the angels: I am with you, therefore make firm those who believe. I will cast terror into the hearts of those who disbelieve. Therefore strike off their heads and strike off every fingertip of them.

8:39 …fight with them until there is no more persecution and religion should be only for Allah…

9:29 Fight those who do not believe in Allah…nor follow the religion of truth, out of those who have been given the Book, until they pay the tax in acknowledgment of superiority and they are in a state of subjection.

25:52 So obey not the unbelievers and fight strenuously with them in many a strenuous fight.

47:4 …when you meet in battle those who disbelieve, then smite the necks until when you have overcome them, then make (them) prisoners, and afterwards either set them free as a favor or let them ransom (themselves) until the war terminates…

If you compare these passages with those from the Old Testament, you’ll notice a big difference: the violence in the Koran is normative, while the violence in the Bible is descriptive. The scripture of the Christians and the Jews tells stories about violence, but the Koran requires believers to practice it on behalf of Allah.

In 1 Kings, 2 Kings, 1 Chronicles, and 2 Chronicles one can find descriptions of hideous carnage, but no directives from God to the Israelites to inflict the carnage.

The prophets repeatedly describe what is to come — the wages of sin to be meted out to the House of Israel. They do not direct God’s chosen people to commit such violence.

The exception is to be found in Joshua, which describes the occupation by the Israelites of the Promised Land; their instruction is to drive out the Canaanites.

But — and this is crucial — once the land is occupied by the tribes of Israel, there is no further divine mandate for slaughter. God did not order His chosen people to convert pagans to Judaism at the point of a sword, nor to kill those who refuse to convert. Judaism was never an expansionist religion, except via the command to “be fruitful and multiply.”

The core message of the Koran, on the other hand, is that all infidels must be converted, killed, or subjugated. Any redaction of this message would leave a lot of blank spaces in the holy text. One can always hope for a modern, enlightened reinterpretation of the book, one that removes the imperative for violence, but it’s very difficult to see how this could be done.

The history of Christianity includes many instances of barbarism and violence, but such acts were never carried out at the behest of Scripture, but always in spite of it. No Crusader could cite chapter and verse to justify a particular bloody act. The members of the Inquisition believed themselves to be engaged in a holy and righteous cause, but they would have been hard-pressed to point to a passage of the Bible that required them to behave as they did.

And what would Jesus do? If He had lived during the time when the Legions of the Prophet swept through the Holy Land, what action would He have recommended to His disciples?

“Render to Caesar the things that are Caesar’s, and to God the things that are God’s” doesn’t work here, since, to a Muslim, Ceasar and God are the same person. The temporal and spiritual realms are not distinct; the political order is coterminous with the leadership of the True Faith.

Many modern mainstream Christian leaders seem to think that their religion requires them to kneel before any violent group and bare their necks to the sword. But if Christians in 732 and 1683 had followed this playbook, Christianity would no longer exist.

Christ commanded us to love our enemies, but does He require us to choose between abjuring Him and committing suicide?

And Jesus entered the temple and drove out all those who were buying and selling in the temple, and overturned the tables of the money changers and the seats of those who were selling doves. And He said to them, “It is written, ‘my house shall be called a house of prayer’; but you are making it a robbers’ den.”

A robust resistance to the unholy is incumbent upon all Christians, since the Kingdom will never flourish in a land of brutality and slaughter. It is time to overturn the tables of the beheaders and the seats of those who make the bomb belts.

The people The Rev broke bread with in Red House may be sincere, or they may be cynical manipulators. But, in any case, they are the smiley-face multicultural front for a group that is insidious, violent, and dangerous.

If Christians refuse to look this truth squarely in the face and deal with it, then Christianity is on its last legs.

Thanks to Ben of the 910 Group for help with the Koran research.