We can’t seem to get out of the Danish trajectory here. 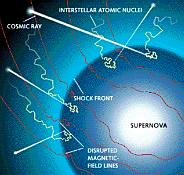 Notice of the Dane’ experiments on the factors in global warning can be seen at M. Simon’s post Monday morning post, which concerns global warming – specifically the generation of clouds.

Wait! I see your eyes glazing over, but it’s-not-what-you-think-it-is. Honest Injun! (yeah, it is politically incorrect, but a handy term nonetheless. Find a Sioux to sue me. Or maybe one of the Mattaponi to be offended. Which they won’t be as long as you spell the name right. Meanwhile…)

Mr. Simon quotes a Timesonline discussion of the rôle the sun plays and how its actions affect cosmic rays, which in turn affect the above-mentioned clouds…or sometimes, the lack of them. No recycled pc pap here:

Disdain for the sun goes with a failure by the self-appointed greenhouse experts to keep up with inconvenient discoveries about how the solar variations control the climate. The sun’s brightness may change too little to account for the big swings in the climate. But more than 10 years have passed since Henrik Svensmark in Copenhagen first pointed out a much more powerful mechanism.

He saw from compilations of weather satellite data that cloudiness varies according to how many atomic particles are coming in from exploded stars. More cosmic rays, more clouds. The sun’s magnetic field bats away many of the cosmic rays, and its intensification during the 20th century meant fewer cosmic rays, fewer clouds, and a warmer world. On the other hand the Little Ice Age was chilly because the lazy sun let in more cosmic rays, leaving the world cloudier and gloomier.

The only trouble with Svensmark’s idea — apart from its being politically incorrect — was that meteorologists denied that cosmic rays could be involved in cloud formation. After long delays in scraping together the funds for an experiment, Svensmark and his small team at the Danish National Space Center hit the jackpot in the summer of 2005.

You’ll have to go over to Mr. Simon’s website to see how the Danes figured it out.

Way cool – or not, depending on the lazy sun.

19 thoughts on “Clouds and Cosmic Rays… oh, and Denmark (of course)”