Fausta has a post this morning about an interview on Abu Dhabi TV in December with Dhiyaa Al-Musawi. See the invaluable MEMRI for the full interview, with English subtitles. 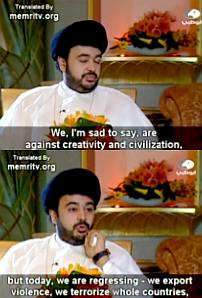 Mr. Al-Musawi is obviously a cultured Arab intellectual, and seems to surpise his interviewer with his forthrightness. He has some hard things to say about his fellow Arabs; for example: “We suffer from backwardness.”

This is an obvious commonplace for those of us in the West with Counterjihad tendencies, but it’s refreshing to hear it from a Muslim in the heart of Araby.

Mr. Al-Musawi argues for a tolerant humanism among Muslims towards the rest of the world, instead of training the young to be what he calls “booby traps”.

Read what he has to say and listen to him talk, and tell me if you think he’s practicing taqiyyah. Remember, he was speaking in Arabic for an Arab audience in the Middle East.

This is the kind of person who needs to be included in our outreach. Even if he’s an apostate, not a “true Muslim”, and doomed to be shunned and killed by his own people — the presence of people like him, there in the heart of Islam, will do more to undermine the radicals and aid our cause than nuking Mecca ever would.

11 thoughts on ““We Export Violence””