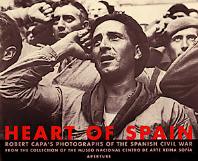 The great romantic cause for progressives in the 20th century was the Spanish Civil War. Beginning in the summer of 1936 and lasting until early 1939, it was in effect the prodromal stage of the full-blown disease that became World War Two.

General Francisco Franco and his military co-conspirators botched the early part of their uprising and failed to take Madrid, thus guaranteeing a protracted and bloody conflict for the control of Spain. Early on in the war, Britain and France effectively prevented a Republican victory, cynically declaring neutrality whilst imposing an embargo against the Spanish Republican government on arms and supplies. General Franco and the Nationalists received ample support from the Fascists in Italy and the Nazis in Germany, and the Republicans were cast into the arms of the Soviet Union for their own support.

If you were a Leftist, a Communist, an Anarchist, or even just an old-fashioned romantic, Spain was the place to be in 1937. Volunteers flooded in from the rest of Europe and North America, forming the “International Brigades” which fought alongside the forces of the Spanish Republic.

The valiant Republicans were celebrated in art and drama, with the photographs of Robert Capa standing as the emblem of the struggle. After the civil war was over, Stalin’s abrupt about-face with the Molotov-Ribbentrop pact took the bloom off the great romantic myth of the Spanish Civil War. Even so, the idea of the “Cause” never completely died.

Al Stewart captures the spirit of the period in this song from his album Between the Wars:

Always the Cause
by Al Stewart

Mariposa
Late nights waiting on the via dolorosa
Hold me closer
Not long now, oh ma bella hermosa
There was always the Cause

Mariposa
Late nights waiting on the via dolorosa
Hold me closer
Not long now, oh ma bella hermosa
There was always the Cause

Mariposa is the Spanish word for “butterfly”. Perhaps the young man in the song was using it as a pet name for his beloved, his bella hermosa.

But mariposa is also Spanish slang for a homosexual. During the war, General Franco was sometimes depicted on his opponents’ propaganda posters as an effeminate fop, and dubbed La Mariposa. But a more likely reference would be to a 1919 play by the homosexual playwright Federico García Lorca, El Maleficio de la Mariposa (“The Curse of the Butterfly”).

The fate of García Lorca is emblematic of the cultural clash within Spain that grew into the Civil War. He was refined, effete, and modern, the essence of 20th-century enlightenment. When the war came he was pulled out of hiding and shot by the Nationalists, a martyr to the Cause.

La Pasionaria (the passion flower) was Dolores Ibárruri Gómez, a Communist Party stalwart and the editor of Mundo Obrero, who was prominent both before and during the war. After her side lost, she was driven into exile and became a citizen of the Soviet Union. However, she lived long enough to return to the post-Franco Spanish democracy and win a seat in the Cortes.

The Communists played a prominent role in the war, eventually taking virtual control of the Republican effort. It wasn’t that the war was “hijacked” by the Comintern; the Republican cause was never strong enough on its own to hold out against Franco. The most dedicated, zealous, ruthless, and brutal fighters for the Cause were to be found among the Communists and the Anarchists.

Spanish industry had flourished during the Great War in order to supply steel and other war materiel to the Allies. After the war, the emerging proletariat was radical and restive. As the Great Depression moved in the most stalwart Anarchist and Communist strongholds were in Barcelona and other industrial areas of Catalonia.

The Republicans, on the other hand, were modern mainstream intellectuals centered in Madrid. They were anti-clerical and anti-monarchy, and when Primo de Rivera’s dictatorship ended in 1931, the Spanish Republic that eventually formed dedicated its efforts to reining in the Catholic church and the monarchists. The King left the country, and the Cortes enacted a series of laws restricting the Church and expropriating its property. The Constitution of the Republic actually banned the Jesuits.

The massacres and executions by the Nationalists have been well publicized. But when the war came, Republican troops massacred Catholic clergy with great enthusiasm. In one of history’s little ironies, Moroccan Muslim troops fighting for Franco found these atrocities repugnant, and fought with dedication for the Nationalists.

With the Franco-British embargo keeping arms out, the only countries who could supply either side were those who were indifferent to the niceties of international law. The British and the French were in full appeasement mode towards Hitler, and not at all keen on enforcing the embargo as it pertained to the great dictators.

As a result the conflict became a proxy war, with the Nazis and the Fascists confronting the Soviets. In particular, the new techniques of aerial war and mass bombardment were tested and perfected over the towns and cities of Spain. The Nationalists received Heinkels from Germany and Fiat B.R. 20s from the Italians; the Soviets supplied I-15s and I-16s to the Republicans. For the three great socialist dictatorships, the Spanish Civil War was the testing ground for their latest firepower. 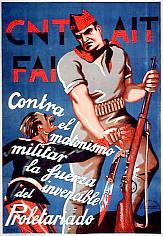 In Spain, as in any other country, the Communists did not tolerate any rival factions on the left, despite the fact that the initial Socialist upheavals had emphasized the unity of the Left in the face of the common danger. The poster at left features the Confederación Nacional del Trabajo (CNT) , the Federación Anarquista Ibérica (FAI), and the Asociación Internacional de Trabajadores (AIT) acting as one contra el matonismo militar la fuerza invencible del proletariado, “against the bullying military the invincible force of the proletariat”. There was solidarity among the workers, whether Anarchist, Socialist, or Communist.

However, as the war ran its course, the Communists acted ruthlessly to suppress any ideology other than that of orthodox Bolshevism. The Anarchists and the Socialists were zealous warriors on behalf of the Cause, but they were nonetheless purged by the Party — imprisoned and executed for the crime of not being Communists, in a civil war within the Civil War.

Intelligent and observant members of the International Brigades came home disenchanted with Soviet Socialism. George Orwell, in Homage to Catalonia, left the best record of this conversion. His experiences in Spain led him to write Animal Farm and 1984, and he became a staunch anti-communist.

But the dream never died. Among those who still deny the guilt of Alger Hiss and the Rosenbergs, who say, “True Socialism has never really been tried”, who look to Hugo Chávez and Fidel Castro for inspiration — among these true believers, the Spanish Civil War is still the Cause.

Communism has departed, leaving nothing but toxic waste, devastated lives, and cubic miles of mass graves spread across five continents. Yet the hope lives on.

General Franco and the Nationalists prevailed against the Republican socialists, but they couldn’t destroy the Cause.

They worked their will on John Barleycorn, but he lived to tell the tale.

Other resources on the Spanish Civil War:

18 thoughts on “Three Years Gone in the Heart of Spain”