When a leader of a Western democracy says that his country is dedicated to fighting Islamic terrorism, it can mean one of several things.

He and his appointees might mean exactly what they say, and order the expenditure of their country’s blood and treasure to prevent terror attacks and to find and neutralize the terrorists.

Alternatively, he might be afraid to take the risks involved. Even though his political circumstances require him to give lip service to the effort, he does little or nothing about Islamic terror.

Or, if his country has vested commercial interests in terrorist-sponsoring states — or even in the terrorist entities themselves — he might be required to go through the motions of anti-terrorism while aiding or colluding with terrorists behind the scenes.

Take, for example, this news story from yesterday:

The Chinese government said Monday that it killed 18 people in a raid on a terrorist training camp in the Muslim northwest of the country.

Security forces said one police officer was also killed in a lengthy gun battle on Friday, and 17 people were captured. Several others escaped, state media reported.

Government forces raided the camp in southern Xinjiang, China’s largest province. It borders Pakistan, and is home to an estimated 10 million Muslims.

The Chinese Security Department said the camp was run by a group called the East Turkestan Islamic Movement (ETIM). The group has been labelled a terrorist organization by both China and the United States.

Chinese officials said al-Qaeda has helped ETIM train at least 1,000 Chinese Muslims who want to use violence to destabilize the region and to create a separate country for China’s Muslims.

Some international experts, however, are skeptical of China’s characterization of the group and the seriousness of the threat.

Chinese Muslim groups based outside the country say Beijing uses the terrorist label as an excuse to attack and arrest Muslims, particularly the Uygur minority. The Uygurs, a Turkish-speaking Muslim group in the west of the country, are the biggest Muslim ethnic minority in China, and the majority in Xinjiang.

The truth behind such incidents can often be hard to discern. ETIM is a real terrorist organization, and has indeed carried out actual terror attacks in China and elsewhere, killing people and causing property damage. Any given crackdown might be a counterterrorism operation, but it also might be a handy cover for neutralizing domestic political opposition. There’s no easy way to tell — a free press does not exist inside China, and there are few opportunities for investigation by journalists from outside the country. Information about sensitive events within China has been stepped on so many times by intelligence agencies, propaganda outlets, and other interested parties, that it has to be treated with a healthy skepticism.

Even the information supplied by the United States government about ETIM can be tainted. In the wake of 9-11, the United States needed China’s help with UN resolutions and its acceptance of American military activity hard on China’s western border in the “Stans”. So the U.S. government declared ETIM to be an al-Qaeda affiliate and froze its assets, thus giving cover to China for whatever crackdowns it deemed necessary in Xinjiang.

A quid pro quo? Once again, the truth is hard to discern. Disinformation on this topic abounds.

Here’s what the Center for Defense Information has to say about ETIM. The article by Amir Taheri is no longer available, so I haven’t been able to verify all the sources. But this seems to be a fairly good summary of what I have read previously:

The East Turkestan Islamic Movement (ETIM) is a separatist Muslim group operating in China’s western Xinjiang province. ETIM is the most militant of the various groups in the Xinjiang region that demand separation from China and the creation of an independent state called East Turkestan. China has long viewed the ETIM and similar groups as a threat to its territorial integrity, and after the attacks on America on Sept. 11, 2001, executed a harsh crackdown on the region by increasing its military presence, detaining suspected members, and limiting religious rights. Chinese authorities blame separatist groups, including ETIM, for more than 200 terrorist attacks since 1990, resulting in 162 deaths and more than 440 injuries.

While China has portrayed its battle with ETIM as part of a worldwide struggle against international terrorism, the group’s global reach and links to al Qaeda are disputed. In August 2002, the administration of U.S. president George W. Bush froze the group’s U.S. assets, and, the following month, the United Nations added ETIM to its “list of terrorists and terrorist supporters associated with Osama bin Laden and his al Qaeda network.” Besides Xinjiang, ETIM cells are said to be operating in Kyrgyzstan, Afghanistan, Uzbekistan, Kazakhstan and Pakistan. U.S. officials claim that the group has a “close financial relationship” with al Qaeda, based on information they received from militants currently detained at the U.S. naval base in Guantanamo Bay, Cuba. A January 2002 Chinese government study found that ETIM members crossed into Afghanistan, where they received training from al Qaeda members, and returned back to Xinjiang to foment terrorist activity. According to the report, ETIM has received money, weapons and support from al Qaeda.

China’s recent interest in suppressing the Uighurs stems at least in part from the collapse of Soviet rule in the “Stans”:

While Uighur dissatisfaction over Chinese rule has been a constant thorn in China’s side over the past several decades, until recently, protests were limited to riots and demonstrations. The collapse of the Soviet Union and the subsequent independence of several Muslim Soviet republics bordering Xinjiang, as well as the rise of Muslim fundamentalism in the Middle East, have contributed to a rise in terrorist activity in the region. Five Uighurs were killed in riots near Kashgar in April 1990, and the region was put under martial law for several months. In February 1992, six people were killed in a powerful bus explosion in Urumqi, and three months later 22 people were killed in riots in Baaren. The various East Turkestan liberation groups showed signs of consolidation when, in September 1994, the five largest Uighur organizations — the East Turkestan Islamic Party, the East Turkestan People’s Party, the Eastern Turkestan Gray Wolf Party, the Eastern Turkestan Independence Organization, and the Eastern Turkestan Liberation Front — met secretly in Gulja to discuss coordinating their activities. In 1995, the province saw sabotage of railroad tracks and oil fields, resulting in extensive damage. The following year, approximately 5,000 Uighurs were arrested after a series of attacks on Chinese interests.

Despite the government crackdown, the separatists’ violent attacks have not abated. In March 1997, a bus explosion killed two people and injured 30 on the heels of several bus explosions that took place in Urumqi, the region’s capital. An Uighur spokesman, in exile in Turkey, claimed responsibility for the attack, and announced that more Uighurs living in Kazakhstan were prepared to execute additional attacks. Attacks in the form of arsons, explosions, assassinations and kidnappings continued throughout 1998. In 1999, the Chinese government arrested hundreds of activists from dozens of various separatist organizations, a period that saw a significant decline in ETIM’s activity. Since then, there have been several armed clashes between the Uighurs and Chinese security forces. In June 2000, a group of Uighurs ambushed a Chinese delegation to Xinjiang, killing one representative and seriously injuring two others.

So there’s no denying the terrorist acts perpetrated by ETIM; the only question is the group’s global reach. Are they “homegrown terrorists”, or full-blown partners with al-Qaeda?

The Uighurs are Sufis, but not all Sufis are “moderate” Muslims. Sheikh Gilani, the Pakistani leader of the terrorist group Jamaat ul-Fuqra, is a Sufi.

The CDI leaves us with this ominous note:

Although ETIM has traditionally focused on Chinese targets, it may have plans to also attack American interests. In May 2002, two of its members were accused of planning to bomb the U.S. Embassy in the Kyrgyz capital of Bishkek, and were subsequently deported from Kyrgyzstan to China.

There’s another country with a notable interest in ETIM: Pakistan. In recent years the PRA and Pakistan’s army have been conducting joint operations aimed at ETIM. Take, for example, this article in China Daily from back in 2004: 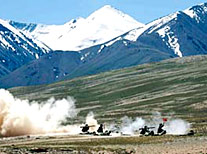 The live-fire drill, on the Pamirs at above 4,000 meters, involved encirclement, assault and mop-up practices, achieved “great success,” said Major General Cheng Bing with the professional group of the joint training.

“The exercise is aimed to further strengthen cooperation between the two countries and armies in non-traditional security field and maintain security and stability in the region, improve the capacity of jointly combating terrorism, separatism and extremism,” Cheng said.

The exercise, participated by China’s People’s Liberation Army and the Armed Forces of Pakistan, also used “most advanced weapons,” giving joint demonstration of anti-terrorism operations, according to Pakistan military source.

China and Pakistan claim to be zealously “fighting terror” together, but what they are really doing remains a mystery wrapped in an enigma wrapped in inscrutability and tied up with a bow of obfuscation.

If ETIM really is an arm of al-Qaeda, Pakistan is walking a fine line indeed by going after it, since its own lawless border areas are hotbeds of al-Qaeda and Taliban elements. The ISI, Pakistan’s intelligence service, has been in bed with the Islamists for more than a decade. Any action against ETIM would thus rub a number of Pakistani groups the wrong way.

Perhaps a deal has been struck in which Uighurs are fair game, but Pashtun- and Urdu-speaking terrorists are left alone. Perhaps China accepts the fact that Pakistan is only going through the motions. Or maybe ETIM is a thorn in Islamabad’s side in ways that the Taliban are not, and Pakistan finds it expedient to enlist Chinese help. Or China may be twisting Pakistan’s arm hard enough to gain its cooperation.

I’m sure Pundita has things to say on this topic. She knows more about the relationship between Pakistan and China than just about anyone else in the English-speaking blogosphere.

Here’s what she had to say yesterday:

Bottom line: The United States of America has a history of being a fickle friend to Pakistan, but China is always there. You can bet that Pakistan’s government is watching very closely the US discussion about whether the US should withdraw soon from Iraq. Their reasoning is that if the US leaves Iraq in the lurch, Pakistan is next up.

What the real story is in Xinjiang is anybody’s guess. It may involve Islamic terrorism, but one thing is certain: it has nothing to do with government of the people, by the people, and for the people.

11 thoughts on “The Middle Kingdom and the Crescent”