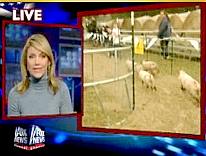 Fox News has a video report on the Friday pig races at Craig Baker’s farm in Katy, Texas.

The story is based on the same local Houston reports that we used for our post last week, but this includes some new video footage that readers will find entertaining.

Fox gives plenty of talking-head time for the Muslims to present their point of view. Fair and balanced: we report, you decide!

In addition, they actually give Craig Baker a sound bite in this one.

Update: Commenter dm60462 reminds me that I should have posted a link to Craig Baker’s Pig Race website.

5 thoughts on “Pig Races on Fox”