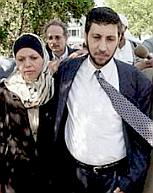 Last week I reported on Fawaz Damra, the radical imam from Cleveland who was stripped of his American citizenship and deported for lying about his connections with Palestinian Islamic Jihad.

I assumed that Damra would return to the West Bank to a hero’s welcome, but alas! It was not to be:

The former imam of Ohio’s largest mosque, deported to his native West Bank last week for hiding his ties to a suspected terrorist group, was arrested by Israeli authorities after crossing from Jordan, his brother said Monday.

Fawaz Damra, 47, had been jailed in Monroe County, Mich., for a year while awaiting deportation for concealing his ties to Islamic Jihad when he applied for U.S. citizenship in 1994.

His brother, Nabil Damra, said the Red Cross and the Center for the Defense of the Individual, an Israeli advocacy group for Palestinians in Israeli-occupied territories, informed him that Fawaz Damra was in custody and had been taken to Israel’s Al Jalameh detention facility near Jenin in the northern West Bank.

“He was arrested the moment he arrived to the border,” Nabil Damra said through a translator by cell phone from the West Bank.

But here’s the interesting part: It was not possible for Damra to be arrested by Israel the moment he returned. He was flown to Amman and taken to the Allenby Bridge, where he was handed over to Palestinian authorities. So it wasn’t the Great Satan that handed him over to the Little Satan — it was his brothers in jihad.
– – – – – – – – – –

[Immigration and Customs Enforcement spokesman Greg] Palmore said that if Damra was arrested, Palestinian authorities — not U.S. authorities — must have handed him over to the Israelis.

So what happened? Why did the Palestinians give up a perfectly good mujahid to the evil Zionists?

I found some clues in Wikipedia:

And here’s some more background on Palestinian Islamic Jihad in an article from 2005:

A marginal player in Palestinian political and social life, Islamic Jihad’s inspiration and orders mainly come from beyond the West Bank and Gaza, Israeli experts and officials say. The group’s commanders are based in Syria while its ideology is inspired by Iran’s fundamentalist regime.

[Palestinian Islamic Jihad] continues to carry out attacks because it wants to be seen as less willing to compromise than Hamas.

“Less willing to compromise than Hamas”!? Are they more anti-Semitic than Hitler, too?

As Hamas entrenches itself as the “government” of the dysfunctional sinkhole known as Palestine, it risks going the way of Fatah — that is, of delegitimizing itself in the eyes of its deranged citizens.

Therefore, any group that can out-Hamas Hamas is a danger to it. Any organization that promises the jihad, the whole jihad, and nothing but the jihad threatens to drain away support from the new ruling party.

The last nail in Damra’s coffin would be the fact that PIJ is an arm of Hizbullah, and therefore a client of Shi’ite Iran, while Hamas is a Sunni organization with support from Saudi Arabia.

But Hamas has found a neat solution to the problem of Damra: turn him over to the Zionists, let him become a martyr to the Palestinian cause, and get him out of the way for good, all without having to fight PIJ directly. Very tidy.

A final note from a friend of Fawaz Damra:

Don Bryant, president of the Greater Cleveland Immigrant Support Network and a friend of Damra’s, was alarmed when he learned Damra had been detained.

“Our biggest fear is that he might stand trial in Israel,” Bryant said. “This is a nightmare for him.”

Have you ever experienced the tender mercies of Palestinian “justice”?