Update: Steen has generously donated a photo of Kai Sørlander, who is a friend of his — ©2007 Snaphanen.

It’s been apparent for some time that the Danes are way ahead of everyone else in the West in their strategies for dealing with Islam. I recommend studying the Danish model — in future, those countries that successfully turn back the Islamist tide will be the ones that most emulate Denmark.

The Danish blogger (and 910 Group member) Zonka has translated a feature article from yesterday’s Jyllands-Posten. In it you will find a breath of fresh air on the immigration issue, an uncommon amount of common sense.

Translator’s note: In this article, author and philosopher Kai Sørlander writes about the divide between the proponents of multiculturalism and immigration, whom he calls optimists, and the xenophobes and Islamophobes, here labelled pessimists. Below is my translation of the article. 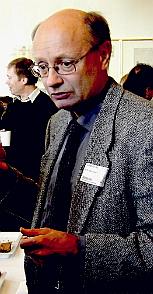 When democracy let the optimists succeed in classifying the pessimists as xenophobes and Islamophobes, it embarked upon a catastrophic course. And the media who have aided to maintain the illusion bear a particular part of the blame, says the writer.

Political discussions often take place on two levels: a substantial level where the parties have differing opinions about some concrete issue, and a secondary level, where the aim is to get your political opponent classified in a way that implies that you yourself are right on the substantial level.

If you can affix your own labels on your opponent, then you can make it impossible for him to voice his substantial arguments. It is a tactical game which is part of the democratic game.

This game can thus also be found in the political disagreement about the last thirty to forty years of immigration policy.

This was a case in which anyone should have known in advance that there would be serious consequences for Danish society, and thus it should have been discussed openly and in all of its aspects. All parties should have had the opportunity to be as clear as possible in presenting their opinions of how many immigrants from relatively distant cultures they thought that Danish society could manage to integrate. And then they should have been required to argue their position, why they believed that their answer was the right one. But at the same time they should also have recognized that there would be a major uncertainty about the answer. Nobody could be sure that his own answer would be superior in the long run.

The optimists should thus also have recognized that there could be a certain amount of rationality in the pessimism, however that recognition was held back. The optimists avoided entering into a serious debate with the pessimists.

Instead they made being a pessimist equivalent to being xenophobic. Those who didn’t share the optimists’ belief in how many immigrants it was possible to integrate into society were classified as xenophobes.

In this the optimists were the ones who ruined the debate, and were greatly helped along the way by the media. Instead of entering an equal debate with the pessimists, they rendered them morally unworthy.

The same rhetorical game also marks a more particular aspect of the political discussion about the conditions for immigration. As an consequence of the fact that many of the immigrants that came into the country in that period were Muslims, it was rational to consider the issue of Islam and democracy. Then one began by recognising that democracy as a rational political order requires a realisation that the laws are made by humans and have to be approved through a parliamentary decision.

Thus one has to recognize that a democratic order more easily integrates a religion that itself recognizes that the laws of society have to be made by humans, than a religion that wants to decide itself how the laws should be. And isn’t that the main difference between Christianity and Islam? Isn’t that exactly the explanation why democracy has been able to develop within Christianity but not within Islam?

Who knows what is right? Under all circumstances we are talking about real problems, which for the sake of democracy there was every reason to seriously discuss in connection with Muslim immigration. But was it done?

No, here also the optimists, who couldn’t see any problem, skipped over the pessimists. Instead of an equal debate, the pessimists were labelled Islamophobes. They suffered from a phobia; they were sick; there was no reason to debate with them.

In this way the optimists succeeded for a long time in creating a climate that made it impossible to take seriously the problems that resulted from liberal immigration policy. Because even to take them seriously was labelled as an expression of xenophobia and Islamophobia.

The consequence then was that nothing was done, and the problems were allowed to grow. Therefore they have also become harder to ignore. And thus it is not quite as easy for the optimists to block serious debate about immigration policy by calling their pessimistic opponents xenophobes and Islamophobes.

On the contrary, the pessimists can now begin to win in the media for their interpretation of the consequences of the immigration policy. And what are the pessimists doing? They naturally uses the same rhetorical trick as the optimists.

They label the opponent in such a way that it is implied that they are mistaken. This can be seen in the title of Karen Jespersen’s and Ralf Pittelkow’s recently published book Islamists and Naïvists. Here the optimists are labelled as naïve, gullible, simple-minded, or even foolishly kind.

Thus the scenario is in place.

In the center is the question itself about the consequences of the liberal immigration policy, surrounded by the two parties, which look with their differing seriousness on these consequences, and which are characterizing each other as xenophobes and naïve. Who is right in this conflict? Are the optimists right that the pessimists are xenophobic? Or are the pessimists right that the optimists are naïve?

A complete answer to that question can naturally only be given once history has taken its turn, and we can’t wait that long when we have to make a political decision. But the answer also requires that we have our concepts in place, and that is something that we don’t need to wait for.

We can get our concepts in place immediately. And on the face of it there is one thing that sticks out: the obvious asymmetry between the way that optimists and pessimists are labelling each other. Where the optimists make the pessimists xenophobic and thus evil, the pessimists only makes the optimists naïve. The demonizing is one-way.

What is the cause of this asymmetry in the parties’ judgment of each other?

The answer must be found the different views of human nature. When the optimists doesn’t see any serious problem arising from the immigration of people from alien cultures, it is because they assume that man by nature is good, and that it is culture that makes people narrow-minded and self centered. In that light multiculturalism is positive, because it sets everybody free from their primary culture and gives them the possibility to live out their natural goodness towards one another. Thus the deconstruction of the prevalent culture is a beneficial project, and those who resist it are evil. They are demonized as xenophobic.

When the pessimists looks quite differently at the consequences of the immigration of people from alien cultures, it is because they have another view of the nature of man. To them man by nature isn’t good, he is combative, and has the potential for both good and evil. And cultural education is necessary to give man the means to interact in such ways that he can suppress his combativeness and live in peace with those in his society.

But who is right? Which view on the nature of man is the right one? If we ask soberly, then there is no reason to believe the optimists. Then all experience and logic says that reality is with the pessimists, and since it is dangerous to build your policy on an illusion, it is imperative that the truth be heard in the political debate.

When democracy let the optimists succeed in labelling the pessimists as xenophobes and Islamophobes, it took a catastrophic course. And the media, particularly the taxpayer-subsidised media who have participated in maintaining this illusion, have a particular part of the blame. If democracy is to get back on track, then rational pessimism has to be at the helm again.

That point of view sees the naïveté behind the optimism. And here Jespersen’s and Pittelkow’s book is an essential contribution.

When so many have shared the optimists’ belief that man by nature is good, it is because one saw a connection between oneself being good and believing in the natural goodness of man.

Anyone who didn’t believe in the natural goodness of man had to be evil. And that connection is simply not going to hold.

As an individual, one doesn’t become good by believing in the natural goodness of man, but by being good and helpful, although one realizes that one also has many impulses in the opposite direction.

22 thoughts on “Naïvists and Human Nature”