Yesterday afternoon the 910 Group, the Christian Action Network, and Gates of Vienna joined forces to pay a visit to the Hon. Virgil H. Goode, Jr., in his office on Capitol Hill. 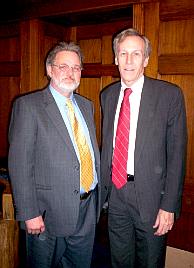 Gary Olds and Martin Mawyer (at right, with Congressman Goode) represented CAN, Christine from the 910 Group was there to listen and answer questions, and I was there as a constituent, to represent Gates of Vienna, to take photos, and to sit in on the conversation.

As most of you already know, Congressman Goode wrote a letter to a constituent last month about newly-elected Rep. Keith Ellison and the Koran. When the letter was made public he found himself in hot water with CAIR, the media, and other members of the Islamophobia Grievance League.

In an effort to clear up any misapprehensions he might have about Islam, Rep. Goode has been visited by Muslims from various organizations. But that’s not his only source of information on the topic — as a member of Congress, he has access to classified information about the Islamist groups that are operating secretly within the United States.

“I tell you, there are some dangerous people right here in the United States — real terrorists,” he said. “The American people need to be aware of it.”

Congressman Goode has a personal interest in the subject, since there are two Jamaat ul-Fuqra compounds within his congressional district. Jamaat ul-Fuqra originated in Pakistan, and was named a terrorist group by the State Department in 2000. Most of its members are based in the United States, scattered in isolated rural compounds like the ones here in Virginia.

Rep. Goode has taken an active interest in the Christian Action Network’s effort to get Charlotte County to take down the “Sheikh Gilani Lane” sign at the entrance to the Red House compound. “I’ve been in touch with the Board of Supervisors about it,” he said. “I wanted to make sure they knew my opinion.”

The presence of Hizbullah and other foreign terrorists on American soil dovetails with the congressman’s commitment to the immigration issue. He talked about the fact that Al Qaeda terrorists, disguised as Latin Americans and with forged Latin American documents, are crossing into the United States from Mexico. “The border is essentially unguarded. We’re being overwhelmed — illegal immigrants are pouring in.”

“We have the most open and tolerant society in the world,” said Rep Goode. “My concern is: what would happen if immigration is unchecked, and our country becomes more than fifty percent Muslim? Would our society still be open and tolerant? I’m afraid we’re going to lose all that.”

In the letter to his constituent, he said this:

The Ten Commandments and “In God We Trust” are on the wall in my office. A Muslim student came by the office and asked why I did not have anything on my wall about the Koran. My response was clear, “As long as I have the honor of representing the citizens of the 5th District of Virginia in the United States House of Representatives, The Koran is not going to be on the wall of my office.”

When we sat down with Virgil Goode, he showed us the wall in question. At right is a photo of what’s up there: the Ten Commandments, the First Amendment to the United States Constitution, and “In God We Trust” (click the small image to see a larger version that you can actually read).

“Those are the things I’m guided by,” he said.

It’s a nice location they’ve got there, an attractive brick building in a toney Capitol Hill neighborhood. It’s very convenient for them; on a nice day they can just walk up to the Longworth Building to mau-mau or cosset selected congressmen, as the occasion requires.

But it seems this location is not good enough for such an important organization.

A US delegation led by CAIR officials yesterday held discussions with Al Habtoor group chairman Khalaf Al Habtoor and other in Dubai about a $50-million public relations campaign that the US group has launched in the US to change negative public perceptions about Islam…CAIR, which is located near the US Senate, plans to boost its activities with a new $24-million office building. It has acquired land for a new seven-storey building and is now raising funds to start construction

Sheikh Hamdan bin Rashid Al Maktoum, Deputy Ruler of Dubai and UAE Minister of Finance and Industry, has endorsed a proposal to build a property in the United States to serve as an endowment for the Council on American-Islamic Relations (CAIR), according to a senior official at the Washington DC-based organisation.

Yet according to Nihad Awad, Executive Director of CAIR, November 18, 2006 (audio link):

CAIR’s budget is only $4 million dollars.

So the sheikhs want to raise CAIR’s allowance, and give it a real footprint in the District of Columbia.

For all practical purposes they’re just an umbrella group for Hamas and other terrorist groups, amply funded from the bottomless well of Saudi petrodollars.

Joe Kaufman of CAIR Watch was on TV a week or two ago demanding that CAIR be declared a terrorist organization along with the groups they front for.

But that’s not the way things work in Washington — CAIR is a respected lobbying arm, the “voice of moderate Islam in America.”

6 thoughts on “A Visit With Virgil Goode”