The essay below is aimed specifically at Jews and Christians. If you are from another faith, or are uncomfortable with religious discussions, you may want to skip this post.

One of the most important and widely-argued issues within the Counterjihad concerns moderate Muslims (or as the 910 Group prefers to call them, “Free Muslims”). Do they really exist? Are they all practicing taqiyyah? Should we take them into consideration, or are they not worth bothering about?

The “Free Muslims” really do exist; Stop the Project has a list of their organizations. They don’t get much publicity, because the MSM, in its tacit alliance with Islamofascism, prefers to focus on CAIR and similar organizations.

But these brave people put their lives on the line every day to speak out on behalf of non-violence and religious tolerance, while still remaining Muslims.

This morning I received an email from a friend of ours who has noticed the nuke-the-ragheads mentality which so often rears its head in Gates of Vienna comments:

A couple of your commenters have got Islam so deeply on the brain, they think the only good ay-rab is a dead ay-rab. People who can’t distinguish individuals from groups are by definition prejudiced.

And indeed they are.

In fact, what they are doing is arguing for the assignment of collective guilt. They believe that innocent people within a group defined as “the enemy” should not be spared the fate of the group, deserve no sympathy, and should be disregarded.

I hesitate to cite the most notorious earlier examples of such an ideological stance, for fear of invoking Godwin’s Law upon myself. Suffice it to say that these folks have some unsavory ideological companions among the blood-soaked regimes of the previous century.

Scripture provides some illumination on this topic. Genesis 18:20-33 describes Abraham’s intercession with the Lord on behalf of the “moderates” (the Bible calls them “righteous”) in Sodom and Gomorrah: 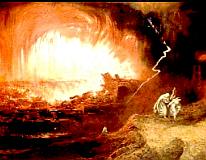 And the LORD said, “The outcry of Sodom and Gomorrah is indeed great, and their sin is exceedingly grave.

“I will go down now, and see if they have done entirely according to its outcry, which has come to Me; and if not, I will know.”

Then the men turned away from there and went toward Sodom, while Abraham was still standing before the LORD.

Abraham came near and said, “Will You indeed sweep away the righteous with the wicked?

So the LORD said, “If I find in Sodom fifty righteous within the city, then I will spare the whole place on their account.”

And Abraham replied, “Now behold, I have ventured to speak to the Lord, although I am but dust and ashes.

“Suppose the fifty righteous are lacking five, will You destroy the whole city because of five?” And He said, “I will not destroy it if I find forty-five there.”

He spoke to Him yet again and said, “Suppose forty are found there?” And He said, “I will not do it on account of the forty.”

Then he said, “Oh may the Lord not be angry, and I shall speak; suppose thirty are found there?” And He said, “I will not do it if I find thirty there.”

And he said, “Now behold, I have ventured to speak to the Lord; suppose twenty are found there?” And He said, “I will not destroy it on account of the twenty.”

Then he said, “Oh may the Lord not be angry, and I shall speak only this once; suppose ten are found there?” And He said, “I will not destroy it on account of the ten.”

As soon as He had finished speaking to Abraham the LORD departed, and Abraham returned to his place.

Note that Abraham is arguing a moral issue with God. Abraham is using the Lord’s own moral laws to intercede with Him and deter Him from indiscriminate retribution.

Can you imagine an Islamist supporting such a dialog with Allah? It would be, by definition, heresy.

We can chew gum and walk. We can fight the vampires of Islamic fascism while supporting those Muslims who have the courage to speak out on behalf of values we share. Both jobs can be done.

If there be but ten righteous, let the city be spared.

51 thoughts on “The Ten Righteous”