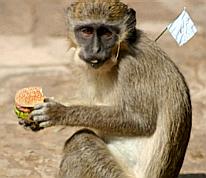 In honor of our position as the world’s newest craven appeaser, I’ve photoshopped a nice self-portrait of America.

Do you want fries with that?