Here’s what he had to say about the Iraq “Study Group” on Larry Kudlow last night [No, we didn’t suddenly acquire a TV…I lifted this off Kudlow’s site]. 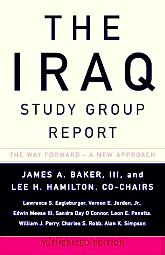 I think unfortunately it has the makings of a prescription for defeat. I call it the Iraq Surrender Group because I think what you see at the core, wrapped around language of defeatism, is a plan for trying to extricate the United States from Iraq with the help of Iran and Syria—as you say, our archenemies.

The likelihood that Iran, which has made it clear in the words of its president, that it seeks a world without America, that it seeks to wipe Israel off the map—that these guys, who have done as much as anybody to destabilize Iraq and to make it impossible, if they could, for us to have a secure, stable, functioning country there, let alone a democracy—are going to help us in any way is, I think, not only silly, but reckless. And that’s why I think it is going to lead to a strategic defeat for this country if these proposals were to be adopted.

It comes down to this: Punish your friends and reward your enemies. That’s exactly backwards. We should be making it clear that if you stand with the United States, if you stand for the things we do, you get our loyal and long-standing support. You’re not going to have us abandoning you.

Stability in Iraq is all well and good to talk about, but the Iranians want it on Iranian terms. And that means a loss for us, a loss for Israel, a loss for Iraqi people, for freedom in the world, and I think it is a terrible mistake.

As we know, all committees tend to lose IQ; and the more crowded with “experts” the group is, the larger the loss of intelligence. Unlike The Wisdom of Crowds, which is aggregated decision-making by people unconnected with one another, the “wisdom” of committees is, a priori, a contradiction in terms.
– – – – – – – – – –
This “group” has proved no different. The members are “realists” and since their tired solutions didn’t work the first time, they bound and determined to apply them with redoubled vigor this time around.

Anything that comes out of Washington is suspect – mined with hidden agendas and corrupt conclusions. This one was not only suspicious, it wasn’t even breathing. Under the aegis of The United States Institute for Peace, how could it be otherwise?

As long as no one tries to implement this dead-end thesis and as long as we can rein in the truly malignant MSM — which right now is in overdrive on the highway to defeat with the Iraq Study Group corpse in the back seat – we and the Iraqis may survive and surmount this assault.

That’s a big caveat, though, because our Iraq expedition has acquired two important similarities to Vietnam:

1. the politicians are making the military decisions,

2. and the MSM is skewing the reality on the ground in order to turn the American public.

Quagmire time, brought to you by the same players, one generation removed. Only this time the loss will be radioactive.