This post, with the addition of a brief commentary, was lifted from the blog of a twenty-two year-old English university student.

It will make you smile; it may even give you hope.

The blog itself is new — this is the first post. I found it by following the profile from a commenter, Lilburnes Ghost. The only changes I made to his post were for grammar and style. Enthusiastic as he may be, Lilburnes Ghost is apparently not acquainted with the notions of either paragraphs or contractions. However, I’ll take his liveliness over pedantry any time!

The Roast Beef Of Old England 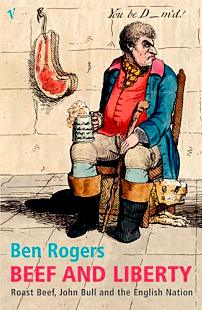 One thing I can’t claim to have done much of is work. It doesn’t say much about the British education system or myself personally that I’ve managed to avoid the University library like the plague and am still here, three years in and going strong!

At least one useful thing has come out of it. One day, while doing some last-minute research for an overdue essay, I came across a book by the name of ‘Beef And Liberty’ by Ben Rogers. I glanced through it, and added it to the pile of books I was checking out. Later I got around to reading through it. The basic idea of the book was that ‘food nationalism’ plays a huge part in shaping national identity, and that in England’s case this food nationalism had always centred on roast beef.

Now, being an Englishman, I’d always loved beef, but just assumed it was a natural, inbred thing, like the French eating snails or Koreans eating dogs. But the book went further; the idea that food, or at least the emotional attachment to certain types of food, could shape both the character of the nation, as well as the men in it, began to make sense. The old rivalry between France and England was defined like this: Johnny Frenchman, a frog-eating ponce in a stripey jumper and a beret, probably riding a bicycle, versus good old John Bull, built like a brick shit-house and raised on slabs of beef, with gravy on everything.

The difference in diet explained everything; the Frenchman’s insecurity of government and fondness for tyranny, over the Englishman’s fierce independence and attachment to liberty. This was the climate in which, during the eighteenth century, spontaneous and patriotic Englishmen formed such groups as the Sublime Society of Beefsteaks and The Beefsteak Club, dedicated to the twin pillars of Englishness: that of Beef, and that of Liberty. If these ideas were good enough for our fathers, they were good enough for me.

In that moment The BeefSteak Society was born.

I decided to start my own group. I’d been raised to be fairly patriotic, and I figure that England’s given me free housing, free healthcare and free education, so you might say I appreciate that. I also enjoy being free to do whatever I please (within reason), and that’s down to being born English, so I’m proud to be English. I do history as well, so I have a bit of an appreciation for the achievements of our people down the centuries.

You’d think, in a stereotypically liberal environment like a University, this wouldn’t go down too well. You’d be wrong! Aside from anything else, there’s the human instinct that makes people band together in tribes. If you’ve ever lived away from home, around people you don’t have much in common with, all this will make perfect sense.

Lancaster’s only an hour’s drive from Stockport but it feels like a lot further away. Living on your own with everyone in the same boat, you make close friends pretty fast. And in my case, I thought: why not get all the lads round on a Sunday, cook a massive joint of Roast Beef, wash it down with a few ales and have a good old-fashioned English Sunday? So that’s exactly what we did.

From there The BeefSteak Society grew and grew. By the end of second year eighteen of us were going on a mass caravan holiday in Newquay; by third year we were old comrades, a society apart, with growing numbers, growing team spirit, and t-shirts on the way!

I had started something far greater than any one man. This was a new experience. This last Sunday, from humble beginnings of six or so, we had grown so big that our kitchen can’t contain us and we’re having to look at renting a function room somewhere on campus!

If I had to explain the popularity of The BeefSteak Society, I could say that we tap into an underlying sense of rootlessness and impotence in the male population of England, which can only be vented safely by eating great quantities of beef, in the company of similiarly frustrated men; or I could say something meaningful about identity in the modern world, and so on.

The truth is, I love beef, I love ale, and I love England, and I wanted to celebrate these things in the company of some like-minded people. A good meal is a good meal, but the people you eat with are what make it great. The BeefSteak Society is never less than great.

So, next Sunday, get some people round to your kitchen, roast yourselves some beef, raise your glasses to the Roast Beef of Old England, and rest assured that The BeefSteak Society will be doing the same.

To which I would add, young man, one of you needs to learn to make a good Yorkshire pudding to accompany your roast while you’re all still young enough to digest it. The ingredients are simple, but like everything else in life, the success in Yorkshire pud lies in its timing.

I should be glad to share my experience if it’s needed. Meanwhile, here’s to your Sunday Roast!

11 thoughts on “Why, Perhaps There May Always Be an England After All!”