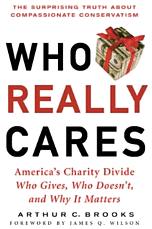 There’s a new book out, written by an academic at Syracuse University. Formerly a Democrat voter who morphed eventually into a Republican before becoming an independent (sound familiar?), the author spent a decade crunching numbers to come up with his findings.

Who Really Cares: The Surprising Truth About Compassionate Conservatism is set for a timely release: right after Thanksgiving. According to the Amazon website editorial, Arthur C. Brooks has impeccable academic liberal credentials:

[He] is professor of public administration at Syracuse University’s Maxwell School of Citizenship and Public Affairs. He is the author of numerous articles and books on topics relating to charity and civic life, and his work appears frequently in the Wall Street Journal and other publications.

Having established his bona fides, here’s what he says [my boldface]:

… conservatives who practice religion, live in traditional nuclear families and reject the notion that the government should engage in income redistribution are the most generous Americans, by any measure.

Conversely, secular liberals who believe fervently in government entitlement programs give far less to charity. They want everyone’s tax dollars to support charitable causes and are reluctant to write checks to those causes, even when governments don’t provide them with enough money.

Such an attitude, he writes, not only shortchanges the nonprofits but also diminishes the positive fallout of giving, including personal health, wealth and happiness for the donor and overall economic growth.

All of this, he said, he backs up with statistical analysis.

– — – — – — – — – –
Anecdotal experience leads most of us to the same conclusion. Conservative families teach their children from an early age the importance of returning to others out of the abundance that they, as a family, experience. And conservative families don’t tend to see their material wealth as something that is due simply to their own hard work or virtue. Nor do they see their wealth as something that belongs solely to them. With prosperity comes the need for discernment in its distribution, and also the recognition that bread cast upon the waters returns to you in ways you cannot anticipate.

A generous heart really does leave the world a better place.

When our readers were so spontaneously openhanded in our recent appeal for financial help, I was reminded of my own mother’s generosity, even when she had very little to share. I saw her giving returned to her in ways she couldn’t have anticipated.

For example, there was the time she took in a young woman who was pregnant and planning to give her baby up for adoption. The girl, a college student, lived with my mother for more than six months. After the baby was born and had been given to a delighted childless couple, the girl returned to her studies and life went on. For my mother the aftermath was a feeling of emptiness once her guest was gone, sadness for the young woman’s loss, while at the same time she shared the happiness of the new parents. As she said at the time, it left her heart sore.

Mother had known none of the people involved. Someone asked her to help and so she did. She met the parents of the girl a few times when they came to visit their daughter and take her to dinner, but she never saw the adoptive parents since they received the baby at the hospital. But of course the impact of having been part of that experience stayed with her; she never forgot any of them and often wondered how they all fared afterwards.

That was simply one of the things I know about that my mother did, but there were many others.

Many years later, when she was retired and finding it hard to make ends meet, an envelope of cash would arrive in the mail every month. She never knew who sent it, or how they knew about her circumstances, but the money continued for some years and helped her to keep the house repaired and the car running.

Are the two experiences connected? You be the judge. When I pointed out what I saw as their synchronicity, Mother just waved it away. Harboring the young woman was just what one was “supposed to do”; it had no bearing on the generous gift she received every month. But if I had been able to ask her mysterious givers about their decision to supplement my mother’s income, I’m sure they would’ve dismissed my question, too. They were merely doing what we’re all here to do: help one another.

Too bad the government is set up to interfere with that natural process. Too bad that those in control of the purse strings seem to believe that government does it better.

In the introduction to The Surprising Truth…, the author admits:

“These are not the sort of conclusions I ever thought I would reach when I started looking at charitable giving in graduate school, 10 years ago,” he writes in the introduction. “I have to admit I probably would have hated what I have to say in this book.”

Still, he says it forcefully, pointing out that liberals give less than conservatives in every way imaginable, including volunteer hours and donated blood.

Giving liberals bad news is not fun, but Dr. Brooks is prepared for the fallout:

Not only will he get yelled at, but other academics will begin picking apart his theses and his conclusions. The old “kill the messenger” mentality — it’s easier to kill him than have to live out the consequences.

Bully for him. It’s nice to know someone is willing to kick out the stool of doctrinal income redistribution as the only solution to economic problems. That’s heresy for some. But if he changes any minds, perhaps those who insist that problems can only be solved by taking more of your money will reconsider their position. Or maybe they won’t. The kind of openhandedness that flows naturally from the sense that we live in abundance can’t arise in a life focused on the day’s dire news.

When you’re waiting for the next MSM-generated catastrophe — whether it be global warming (or the new ice age), oil depletion, the nuclear Armageddon — whatever terrible event surely lurking just around the corner, who has the time, energy, or gratitude left to foster abundance?

For some of us, Thanksgiving is a special day; for others giving thanks is what you do when you get up in the morning.

4 thoughts on “What You Knew Anyway: Conservatives Are More Generous”