This post is being left on top for one more day — scroll down for newer material. I’ve got a new post about the Great Diebold Conspiracy which will be up momentarily.

In case anyone who donated in the past two days hasn’t received a note from us yet — we had at least one of our outgoing emails bounce. Send us an email and we’ll reply to you at that address.

This donation gig is kind of like fund-raising week on your local NPR station, when your favorite lefty political program is repeatedly interrupted by the local station announcers begging you to “call our toll-free number!”

The main difference (besides our politics, that is) is that we haven’t set a goal that we have to meet. We’ll just leave this up until we and/or you get tired of it.

The initial response has been overwhelming — some of you are real optimists, and have paid for years of Gates of Vienna in advance! We’ll have to take our vitamins…

Thanks to everyone who has made the jar ring. You’ll all hear from us individually, in short order.

As some of you already know, I have been unemployed for five months now. I resigned my job in Richmond voluntarily and in good standing, after being at the same place for seven years.

Since Dymphna has now gone public on the issue, I can reveal that one of the main reasons I quit was so that I would no longer have to stay away from home all week and only come home on weekends. My wife is ill with fibromyalgia and needs me here, and I felt the need to be here. In addition, the long commute to Richmond and my prolonged absences from home were finally beginning to wear me down.

What I didn’t fully anticipate was how hard it is to find jobs in my field in the Charlottesville/Lynchburg area. I’m a computer programmer, but with a fairly narrow specialty. In the high-tech corridors around Reston or in the West End of Richmond there are plenty of jobs in my range. But it turns out that around here such jobs are few and far between. 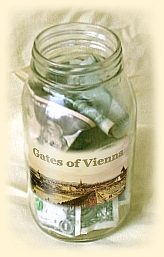 The upside of the current situation is that I get to blog all the time, which has been great. In the last six months Gates of Vienna has really taken off, and I have been able to write what I want in the midst of my (so far futile) job hunt.

A number of our readers have been kind and donated to Gates of Vienna since we put in the tip cup. You know who you are, and I thank you!

And it occurred to me that, based on our current traffic, if every reader who really, really likes Gates of Vienna were to contribute a dollar a month to our tip jar, I could keep the job search going for a while longer without facing financial disaster.
– – – – – – – – – –
I’m not under any illusions — nobody can make a living by blogging. But I know a job opportunity will open up for me in good time, and I just want to keep my head above water until then.

So… If you decide to follow my dollar-a-month suggestion, you’ll probably want to lump several months together, since Paypal charges 30 cents per transaction, in addition to a small percentage. For efficiency’s sake, five or ten months’ worth at a time makes more sense.

Anyone who feels so inclined may use the tin cup down our left sidebar (Blogger won’t allow a “donate” form to be inserted into the post itself).

And, in any case, thank you all for your support. The email is overwhelmingly friendly, flaming is rare, and the trolls are few! Life doesn’t get any better than that…

Even after I get my job I will keep on posting here. Not as often, and maybe only on weekends, depending on the nature of my work. You’ll be hearing more from Dymphna, in that case.

48 thoughts on “For Just Pennies a Day”