You have said that the countries of Western Europe are facing a civil war in the near future, fueled by the large mass of unassimilated immigrant Muslims which politically correct orthodoxy has allowed to accumulate.

You have said that we are probably seeing the first skirmishes of this war in the riots that have recently broken out in Brussels, Gothenburg, Windsor, and the banlieux of Paris. You see these as the beginning of what might be called the Multicultural World War.

But, now that the war is starting, how will it unfold? Assuming that the native inhabitants of Europe do not simply lie down in the streets like good dhimmis and let the legions of the Prophet trample over them, what will come next? 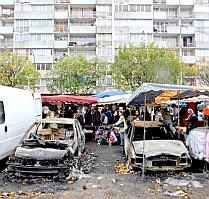 First of all, the will of Europe’s people will eventually be heard. In virtually every European country, public opinion is shaped, suppressed, guided, and stifled by government control of the media and the absence of laws which would permit truly free speech. A huge behemoth of bureaucratic inertia has metastasized into the European Union, and will continue this suppression in order to hold onto the levers of power and the trappings of privilege for as long as possible.

But popular discontent can only be held in check for so long, and will be all the more vigorous when it finally bursts forth. This will occur as more and more working-class neighborhoods succumb to the lawlessness of immigrant gangs acting violently and with impunity. Then people will want a change in public policy. As the violence and disorder spread to middle class neighborhoods, or even to the gated redoubts of the élites, electoral pressure for change will become inexorable.

This process is beginning already, as the recent election in Sweden shows. The parties that have up until now been marginalized by these élites as “right-wing extremists” — the British National Party, the Vlaams Belang in Belgium, the Dansk Folkeparti, and the Front National in France, for example — have grown increasingly popular in recent months, despite the opprobrium of the cognoscenti.

Eventually, when the situation gets bad enough, one or more of these “extremist” parties will gain power, either through an outright majority or through a majority within a center-right coalition. At that point the nationalist party gains the right to appoint its members to the key Defense and Interior Ministries (or their equivalents within a particular country).

Then comes a fork in the road.

In a normal, well-functioning democracy, the people’s will would in due course be carried out through its elected representatives. The ministers would give the orders, the functionaries in the ministries would obey, and the country would take action to defend itself and avert the rapidly looming catastrophe.

But are the European countries well-functioning democracies? Will the entrenched élites — all those with a vested interest in continuing the status quo of the existing Eurabian system — go gentle into that good night? Or will the members of the permanent bureaucracy, the media, and the upper levels of the academy fight tooth and nail to maintain their Multicultural hegemony?

The USA has a much milder case of the same deadly disease, but my experience here gives me little cause for hope about Europe. The media will mobilize to demonize, discredit, and delegitimize the new ruling government. The propaganda in the schools and universities promoting the Multicultural ideal will increase to a level that Göbbels would admire. The members of the bureaucracy, firmly adherent to the old system, will drum up scandal, release damaging information selectively, drag their feet when carrying out the new policies, and in general do whatever they possibly can to thwart the will of the newly-elected leaders.

In effect, there will be a cultural civil war. To suppress the renascent nationalists, the adherents of the existing power structure will mobilize any available assets, including their immigrant allies.

However, the will of the people can never be suppressed indefinitely. It will prevail. If it cannot proceed through the legitimate pathways of a democratic state, it will go around them. In effect, the rule of law will be suspended.

Once that happens, things will get ugly, with no guarantee of public order or the security of civil society.

We all hope this doesn’t happen. We hope that those in the entrenched ruling class will place the interests of their people above their own hold on power. But history holds out scant reason for optimism in such situations.

Europe can wake up now, or it will be jolted out of its slumber later by a knock on the door. Waiting on the other side is an armed man in a uniform, a man of firm purpose, having no qualms and no scruples. He is ready to act at a moment’s notice, and with absolute ruthlessness.

72 thoughts on “The Shape of Things to Come in Europe”