If you mention the name “Al Stewart” to someone, if he recognizes the name at all, he’ll say, “Oh, yeah— isn’t he that pop singer from the ‘70s, the one who sang ‘Year of the Cat.’?”

Al Stewart is indeed that singer, but there’s a lot more to Al Stewart than “Year of the Cat” and “Time Passages.” He has an unsurpassed body of work, and is still composing and performing excellent songs. 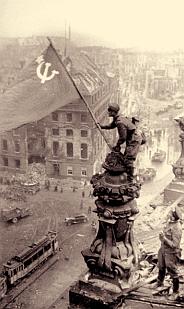 Stewart’s music is intricate and sophisticated, but his lyrics have always been what capture my attention. I consider him the greatest living lyricist writing in English. To top it all off, he’s a history buff, and many of his songs delve into historical themes with an eloquent attention to detail. He has released two albums, Past, Present, and Future (1974) and Between the Wars (1995), which are devoted entirely to historical themes.

We have occasionally alluded to and quoted from Al Stewart lyrics here at Gates of Vienna, but it’s time to feature an entire song. This is one of his finest: from Past, Present, and Future, it tells the story of the Second World War from the point of view of a low-ranking Soviet soldier.

The music is just as good as the lyrics; I recommend buying the CD. Various other songs on the album feature Warren Harding, Ernst Röhm, and Admiral Fisher.
– – – – – – – – – –
Roads to Moscow
by Al Stewart

They crossed over the border the hour before dawn
Moving in lines through the day
Most of our planes were destroyed on the ground where they lay
Waiting for orders we held in the wood — word from the front never came
By evening the sound of the gunfire was miles away
Ah, softly we move through the shadows, slip away through the trees
Crossing their lines in the mists in the fields on our hands and our knees
And all that I ever was able to see
The fire in the air glowing red silhouetting the smoke on the breeze

All summer they drove us back through the Ukraine
Smolyensk and Viyasma soon fell
By autumn we stood with our backs to the town of Orel
Closer and closer to Moscow they come — riding the wind like a bell
General Guderian stands at the crest of the hill
Winter brought with her the rains, oceans of mud filled the roads
Gluing the tracks of their tanks to the ground while the sky filled with snow
And all that I ever was able to see
The fire in the air glowing red silhouetting the snow on the breeze

Two broken Tigers on fire in the night flicker their souls to the wind
We wait in the lines for the final approach to begin
It’s been almost four years that I’ve carried a gun
At home it’ll almost be spring
The flames of the Tigers are lighting the road to Berlin
Ah, quickly we move through the ruins that bow to the ground
The old men and children they send out to face us, they can’t slow us down
And all that I ever was able to see
The eyes of the city are opening now, it’s the end of the dream

I’m coming home, I’m coming home
Now you can taste it in the wind, the war is over
And I listen to the clicking of the train wheels as we roll across the border
And now they ask me of the time
That I was caught behind their lines and taken prisoner
“They only held me for a day, a lucky break”, I say;
They turn and listen closer
I’ll never know, I’ll never know
Why I was taken from the line and all the others
To board a special train and journey deep into the heart of Holy Russia
And it’s cold and damp in the transit camp, and the air is still and sullen
And the pale sun of October whispers the snow will soon be coming
And I wonder when I’ll be home again and the morning answers, “Never”
And the evening sighs and the steely Russian skies go on forever

The image at the top of this post is the official photograph of the raising of the Red Flag over the Reichstag on May 2, 1945 after the Russians entered Berlin. But this photo was staged; the flag was actually first hoisted atop the Reichstag on April 30th. The original was knocked off by a German shell at some point; the flag was raised again on May 1, and then the final, official version was created for the photographer the next day.

But even that illustrious publicity stunt had at least two versions. One version, featured below, was deemed unsuitable for official propaganda because expensive plundered wristwatches are clearly visible on the wrists of the soldiers. In fact, if you look carefully, you’ll notice that the soldier helping to steady the man holding the flag actually has two watches, one on each wrist. 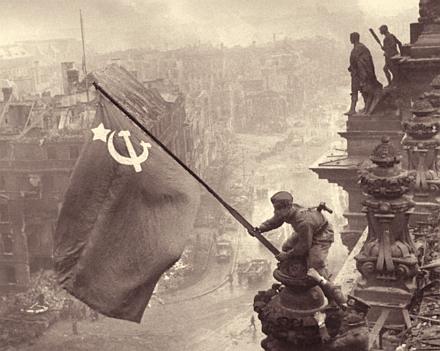 The photo finally chosen to be the icon of the Soviet victory was carefully airbrushed and lacking in wristwatches.

All this is a reminder that fauxtography was an established institution more than sixty years before the phrase “reutered photograph” was coined, and the Soviets were the undisputed masters of the art. The group photo of the Old Bolsheviks stands as an exemplar of the genre, with all the old cronies airbrushed out one by one as they were liquidated, leaving nothing but Lenin and Stalin — and all those mysteriously blank stretches of wallpaper in the background — looking into the camera.

15 thoughts on “The Road to Berlin”