A reader has brought to our attention this document from 2004, in which the Office of the Inspector General reported on the OIG’s success in carrying out one of its more important responsibilities:

Section 1001 of the USA PATRIOT Act (Patriot Act), Public Law 107-56, directs the Office of the Inspector General (OIG) in the U.S. Department of Justice (DOJ or Department) to undertake a series of actions related to claims of civil rights or civil liberties violations allegedly committed by DOJ employees. It also requires the OIG to provide semiannual reports to Congress on the implementation of the OIG’s responsibilities under Section 1001. This report — the fifth since enactment of the legislation — summarizes the OIG’s Section 1001-related activities from December 16, 2003, through June 21, 2004.

One of the OIG’s responsibilities is to make sure that suspected terrorists are aware of their rights under the United States Constitution. The agency is required to provide materials and services publicizing the rights of suspects, including those in the prison system.

The OIG’s website contains information about how individuals can report violations of their civil rights or civil liberties. On our website, the OIG also continues to promote an e-mail address — inspector.general@usdoj.gov — where individuals can send complaints of civil rights and civil liberties violations. During this reporting period, the OIG received most of the 1,613 complaints via e-mail.

The OIG previously developed a poster, translated in Arabic, that explains how to file a civil rights or civil liberties complaint with the OIG. An electronic version of this poster is also available on our website.

The DOJ’s main Internet homepage contains a link that provides a variety of options for reporting civil rights and civil liberties violations to the OIG. The Civil Rights Division’s website also describes the OIG’s role in investigating allegations of misconduct by DOJ employees and provides information on how to file a complaint with the OIG.

In the prior reporting period, the OIG arranged to have the following television advertisement aired with the text spoken in Arabic and scrolled in English:

Also in the prior reporting period, the OIG submitted public service announcements to 45 radio stations in cities across the country, including New York, Los Angeles, Sacramento, Chicago, Detroit, Houston, Dallas, and Washington, D.C. The text of the PSA read:

Last year, we also purchased airtime for 44 radio advertisements on Arab/Muslim American radio stations in New York, Chicago, Los Angeles, Detroit, and Dallas. These advertisements, which ran in late 2003, were 60 seconds long and included the same script listed above both in English and Arabic.

Previously, the OIG disseminated approximately 2,500 Section 1001 posters to more than 150 organizations in 50 cities. The posters, in English and Arabic, explain how to contact the OIG to report civil rights and civil liberties abuses.

In an earlier reporting period, we also provided the posters to the BOP, which placed at least two in each of its facilities. We have received hundreds of complaints each reporting period from inmates alleging civil rights and civil liberties abuses, many of which we believe were sent to us in response to the posters.

During this reporting period, the OIG purchased additional newspaper advertisements highlighting its role in investigating allegations of civil rights and civil liberties abuses. The display advertisement was placed in an Arab community newspaper and appeared both in English and Arabic.

Flyers have been translated into several commonly spoken languages in the Muslim world, including Arabic, Urdu, Punjabi, and Vietnamese. The OIG intends to provide these flyers and a forthcoming flyer translated into Indonesian to the BOP with a request that they be made available to incoming inmates in their native languages. 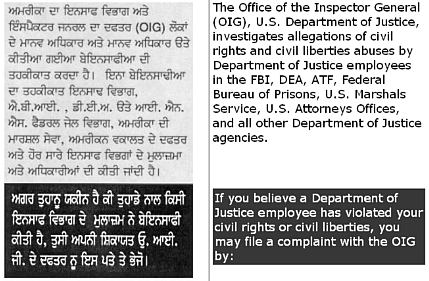 To conclude, ladies and gentlemen, here are your tax dollars at work:

During this reporting period, the OIG spent approximately $322,800 in personnel costs, $19,762 in travel costs (for investigators to conduct interviews), and $2,105 in advertising and publication costs, for a total of more than $344,668 to implement its responsibilities under Section 1001. The personnel and travel costs reflect the time and funds spent by OIG Special Agents, inspectors, and attorneys who have worked directly on investigating Section 1001-related complaints and on conducting special reviews.

These figures are for the first half of 2004. I’m sure that the OIG’s budget has increased in the last two years, and by now it must be spending over a million dollars a year inviting prisoners and suspects to game the system.

The OIG seem to be very proud of the “1,613 complaints [received] via e-mail”. As well they should be — the numbers prove they’ve been doing their job, right?

But think of the additional costs this operation has imposed: all those complaints inspired by the OIG’s advertising had to be acted on. Lawyers with the DOJ had to file motions, investigators had to be dispatched to investigate, corrections officers had to be taken away from their normal duties to be questioned, and mountains of official paperwork had to filed, encoded, digitized, copied, and distributed. There’s no way to quantify the extra expense incurred by all this folderol, but I have no doubt that it’s substantial.

Before I go any further, I’ll say this: I’m a racist. I know I’m a racist. I’m an incorrigible, slope-headed, beetle-browed, knuckle-dragging, paleolithic racist. Everything I say below will show this, so don’t bother emailing me.

Now: why are we distributing flyers to terrorists that inform them of their constitutional rights — in Arabic? Why put up posters in Urdu helping them to file complaints?

And why are we working with CAIR, an organization with well-documented connections to Islamist terror groups?

Don’t get me wrong; I’m in favor of everyone having constitutional rights, even suspected or convicted terrorists. But why bend over backwards to invite them to pull the wool over our eyes? Why issue invitations for taqiyya?

We already know, based on captured Al Qaeda materials, that Islamist terrorists are trained to game our legal system and our courts, not to mention the media and the academy. They are taught how to find the vulnerable points in an open and tolerant and society, and then exploit them. Why on earth are we putting up neon signs telling them how to do it?

If the suspect in question is an American citizen, why can’t he read about his rights in English? I don’t think he learned about the First Amendment in an Arabic-language civics class in high school. Why does he need Arabic now?

If he’s not an American citizen, he does not have rights as enumerated in the U.S. Constitution, and he doesn’t need to hear about them in Urdu. His rights are simple and straightforward: to be treated humanely, to be fed and clothed at government expense, to be granted due process in an immigration court, and then (hopefully) to be deported.

Am I overreacting, or does all of this sound like mass insanity?

Update: Commenter Kaptaan has this to say:

Baron, the poster you displayed in the post that has the English version on the right side is written in Punjabi using a Gurmukhi script which is used in the Punjab of India NOT Pakistan. This is probably for the safety and for the benefit of Sikhs who are MISTAKEN in the USA as muslims, not for muslims themselves. For more information on who the Sikhs are you can visit www.sikhs.org or google various sites on the web.

Kaptaan is quite right; Sikhs are often mistaken for Muslims, when they are in fact at least as opposed to Islam as any of us in the West.

That doesn’t detract from my main point. There would be very few non-Muslim Arabic speakers who would need the Arabic posters. And Urdu (which the text lists as one of the languages used by OIG) is spoken by Muslims in Pakistan and India.

Nevertheless, everyone should learn to recognize the Sikh turban (as my ever-helpful readers have taught me to do) so that they don’t “profile” the wrong guy.

3 thoughts on “The Department of Justice Solicits Taqiyya”