They were only four blocks apart, but the celebrations this past Saturday occurred across a chasm so vast no bridge long enough could be engineered to span the differences between the two groups.

The last weekend in September is usually beautiful in the foothills of the Blue Ridge. This past one was no exception. Last year on this weekend I was confined to the house, recovering from a shredded meniscus in my left knee. The Baron had gone into town to get armloads of books so I would have enough reading material to while away the time.

As he was coming out of the library, he looked to his right and saw some sort of festival taking place in Robert E. Lee Park. There were banners, and booths, and food. Vegetarian food galore. Unfortunately, he hadn’t taken the camera with him to capture all this celebration, but he wandered over anyway, to see what he could see. First, of course, he hid the more outré VRWC books he’d borrowed for me.
– – – – – – – – – –
What he saw was the usual round-up of those from what Bob Godwin at One Cosmos calls “the psychological left.” I used to view the far Left’s differences from the rest of us in terms of politics, but his description brought home forcefully that this group’s beliefs transcend mere politics. They incorporate a worldview in which many of the values Americans take for granted are seen as evil and perverted. And the obverse is also true. What the law would call “the reasonable man” would find many of their strongly defended positions… well, maybe “perverse” is the kindest way to put it. Perhaps that is one reason their arguments are so intense and frenzied: they are beliefs arrived at through feeling rather than reason. And that is why dialogue is not possible. Attempts at doing so will so threaten the foundation of this global lack of faith in human nature.

Whilst moving among the booths set up by the Bush Derangement Syndrome folks and the screwy economic theories hanging from threads around the PEACE and JUSTICE demonstrations, the Baron discovered the most interesting extreme: the “Visualize Industrial Collapse” folks. Among their many fascinating pamphlets and broadsheets he found The Primitivist Primer. Here’s a small sample from a larger quote:

“The Primitivist Primer”… outlines a manifesto for an anti-industrial political philosophy: What is anarcho-primitivism?

…At best, then, anarcho-primitivism is a convenient label used to characterize diverse individuals with a common project: the abolition of all power relations — e.g., structures of control, coercive authority, domination and exploitation — and the creation of a form of community that excludes all such relations. 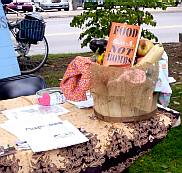 That was last year. This time, camera in hand, the Baron and I (my knee mostly healed) headed to this year’s Vegetarian Festival so I could see for myself the spectacle. And again, it was a beautiful day, sunny and mild… God’s mercy shines on the vegetarians, it seems.

We strolled through all the displays — which ran the gamut from Peak Oil scare pamphlets to a project devoted to neutering feral cats and an earnest young woman manning staffing a booth for “FOOD NOT BOMBS.”

I listened with interest to her ideas and took a picture of her display, along with a broadsheet which seemed to imply that one could stab those nasty militarists with pointy carrots. “Stick It to The Man With a Spoon in Hand” sounded like prison jargon to me. But that’s just my vast right wing view. 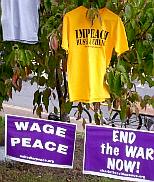 There was a lively “Impeach Bush and Cheney” table. They had t-shirts for sale, and people were busy signing petitions. During the 2004 elections (stolen, of course), I grew used to seeing the “Impeach Bushitler” bumper stickers. It was intriguing that in two years the movement had expanded to include Cheney, too. Now here’s an interesting thought experiment: suppose the Democrats take back the House in the November elections. And suppose further that they manage to haul President Bush and his cohort off to impeachment proceedings. Here’s the punch line: Can you say “President Pelosi”? 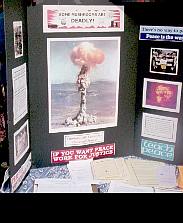 That nightmare aside, no veggie festival would be complete without — ta-da — the mushroom cloud lingering over everything. In order to avoid this catastrophe we are supposed to earnestly and sincerely wage peace. Hear that, Mr. Ahmadinejad? Want to wage peace with your nuclear reactors? Back in the 20th century, who ever could have dreamed that the Persians could make one long for the good old Cold War innocence of the ‘50s?

All these dire predictions everywhere, but no “Visualize Industrial Collapse.” Where did they go? Was there no longer anyone willing to represent nihilism? Where are the anarchists when you need them? When I got home I googled the phrase, hoping to come up with some interesting news but (besides references in blogs, including Gates of Vienna), all I could find was the lyrics to their anthem, “Day of Suffering”:

You can get the tune for these lyrics as a ringtone for your cell phone. Some industrial collapse that is. I mean, will there be cell phones when “the machines rot in dormancy” (whatever that means)?

This stuff is so bad, you can’t make it up. But they never quit trying. Now we are supposed to toss and turn at night wondering when oil will run out. Sorry, Peak Oil People, I already did that when Jimmah was in charge and we know how accurate he turned out to be.

I did manage to find a V.I.C. website, but it’s only been in operation a few months and for all I know, it may be tongue-in-cheek. Lots of strange eggs and chickens, there, however. Not metaphorical ones, real fowl with real ova. No, I take that back. Che is on his reading list. He’s for real, just not the real thing… and besides, he’s only one person, not an organization. Heavens to Betsy, imagine his reaction when our readers start clicking the link to him!

By the way, Helen Caldicott, Dr. No-Bombs, was scheduled to speak at the University that night. Amazing. I didn’t know she was still alive. Fortunately, industry having failed to collapse, I wasn’t forced to go listen to her tired and anachronistic message.

Having filled up on verboten meat kabobs before attending this event, the Baron and I didn’t stop to eat. One thing I’ve noticed about vegans is that they charge a lot of money for not much actual nutrition. Our eyes eventually glazed over; how many doom-and-gloom posters can you read? Though I must admit, the booths with kittens were quite irresistible — to me at any rate. The Baron was less moved.

However, we were both definitely ready to move on.

Remembering that we had seen, just four blocks away, a celebration of a different stripe, we walked over to take a closer look. 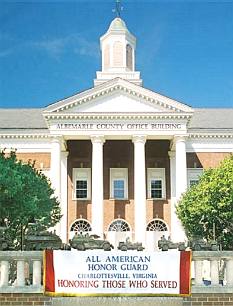 The Veggie Festival was celebrating its tenth year. By coincidence, so was the second event we went to see: The All American Military History Weekend. I noticed that the food-not-bombs folks were willing to hold their festival beneath a large statue of Robert E. Lee astride his war horse, Traveller. They studiously ignored his looming presence; one wonders how long General Lee’s stone representation will be permitted to stand in Berkeley East.

This festival was dedicated to and sponsored by veterans. This year, the honors and memorials included local folk:

The 2006 event is dedicated to
David Wallace
Albemarle County Police Officer and National Guardsman who just returned from two years of service in Iraq,

and dedicated in memory of:
Edwin Andino II
Bradley Arms
Adam Fargo
local heroes of the war in Iraq who gave their lives to preserve freedom;

and
Eric Sutphin
beloved friend and past Vice President of the All-American Honor Guard. Eric was killed in the line of duty August 21, 2006, while serving as a Deputy with the Montgomery County, Virginia Sheriff’s Office. Eric previously served as a police officer in the city of Charlottesville and the counties of Albemarle and Fluvanna.

After the vegetables, it was good to walk among the tents and campsites of Jamestown, Revolutionary War, Union, Confederate, WWI and WWII demonstrations.

These photos from the demonstrations are in no particular order, though they begin with Jamestown. One of the volunteers there was re-enacting the role of a doctor. The tooth-pulling device looked gruesome.

We saw Vietnam vets and talked to the Red Cross ladies, who were dressed in WWI garb, as were the Salvation Army representatives. The latter had a treasure trove of original materials from WWI, including lots of pictures of soldiers eating donuts as fast as the Salvation Army workers could make them. 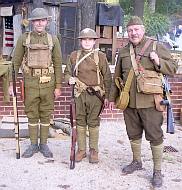 In addition, these men and women volunteered to get money back to the folks at home and make personal visits to find out what families might need. One moving picture showed both black and white troops lined up for the donuts. Even the generals had to wait in line.

The machine gun fellow posed for me because I missed his actual rat-a-tat demonstration. He and his fellow doughboys were wearing wool uniforms. Even after tossing their greatcoats onto the retaining wall, they still sweated in the warm afternoon sun.

The doughboys also posed dutifully for us.

You can see the Union soldiers firing their Enfield rifles, but we missed the first volley by the Confederates. Since this is an ongoing competition, maybe we’ll get to see it next year…

The cannon demonstrations were impressive. How often I’ve passed those silent guns in courthouse squares, without stopping to think of the soldiers who manned them. In this reenactment, four men were required to keep things going, and even at top speed it took more than a minute between shots. The men were sweaty and breathing hard.

With all the guns going off, small puffs of smoke wafted over the centuries of tents. The echoes of shots fired and the smell of cordite hung in the autumn air as people called to one another in friendly rivalry. Sailors and soldiers. Tanks and jeeps. Armament and tents. I passed a small quickly-assembled shelter meant to keep the rain off the sleeping bag under it. I thought about the men who had lived like this for months and years. I thought of the men who never came home.

The chasm between those who think war can always be avoided and those who know otherwise is vast indeed. In this small town, only four blocks separated them. In the ongoing struggle in the real world, it might as well have been four light years.

I know which group which group I want to be with should the times turn dangerous. Hint: it will not be the ones fighting with carrots.

11 thoughts on ““Peace” and War on an Autumn Afternoon”