A couple of weeks ago I posted the lyrics to an Al Stewart song and generated some interest among our readers who weren’t familiar with Mr. Stewart’s music. One commenter even averred that he was going to buy the CD in question… So, in the interest of increasing Al Stewart’s CD sales, I will present the lyrics to another one of his historically-oriented songs.

This one is of more recent vintage and showcases the singer in the full maturity of his art. You really need to hear the music to get the full impact of it — aided by a cheerful melody, and accompanied by a piano and a lilting accordion, the song begins innocently, and seems poised to deliver a series of nostalgic banalities about the trains of yesteryear.

About halfway through it begins to metamorphose into something else, and unfolds a much darker theme, one which stands in stark contrast to the pleasant tune and instrumentation:
– – – – – – – – – –

The school years passed like eternity
And at last were left behind
And it seemed the city was calling me
To see what I might find
Almost grown, I stood before horizons made of dreams
I think I stole a kiss or two while rolling on the clicking wheels of trains

The silver rails spread far and wide
Through the nineteenth century
Some straight and true, some serpentine
From the cities to the sea
And out of sight
Of those who rode in style there worked the military mind
On through the night to plot and chart the twisting paths of trains

Trains…
Rolling off to the front
Across the narrow Russian gauge
Weeks turn into months
And the enthusiasm wanes
Sacrifices in seas of mud, and still you don’t know why
All their lives are just a puff of smoke against the sky

But oh what kind of trains are these
That I never saw before
Snatching up the refugees
From the ghettoes of the war
To stand confused
With all their worldly goods, beneath the watching guard’s disdain
As young and old go rolling on the clicking wheels of trains 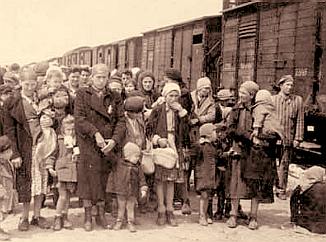 And the driver only does this job
With vodka in his coat
And he turns around and he makes a sign
With his hand across his throat
For days on end
Through sun and snow, the destination still remains the same
For those who ride with death above the clicking wheels of trains

If you’re interested, this song is from the album Famous Last Words (1993), and is available from Amazon. Not all the songs on it have historical themes, but there are two that feature Peter the Great and Charlotte Corday respectively.

Al Stewart was an accomplished musician and songwriter at the age of 23, and remains one today at the age of 60. Some of the earlier albums are hard to find — it took me years to track down Orange — but they’re all worth listening to.

11 thoughts on “Just a Smudge of Smoke Against the Sky”