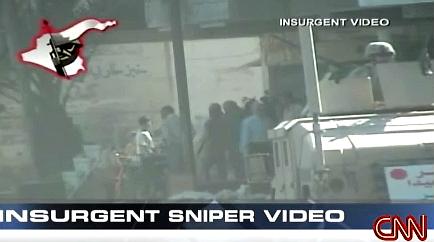 These videos aren’t just any snuff videos. They’re tapes made in Iraq by Islamic terrorists, of American soldiers being shot by snipers.

This is the lead story on the CNN website this morning.
– – – – – – – – – –
It’s almost impossible to find the words to express how disgusting CNN is. This is the high-minded network that, out of respect for the religious sensibilities of Muslims, could not bring itself to show the Danish Mohammed cartoons.

But out of respect for our country, our military, and the families of the victims, they are airing videos of those slain soldiers made by the people who killed them.

Oh yes, they make sure that they black out the exact moment when the bullet takes out the soldier. That way nobody will be disturbed — one moment he’s standing there alive and warm, the next he’s just another dead body lying in the dust of Iraq. No big deal.

And CNN has its usual sanctimonious justification for its behavior: the terrorist group doing these despicable deeds wants to negotiate with the United States:

Almost 2,800 Americans have been killed so far in Iraq and one of the most dangerous insurgent opponents is the sniper. CNN has obtained graphic video from the Islamic Army of Iraq, one of the most active insurgent organizations in Iraq, showing its sniper teams targeting U.S. troops. The Islamist Army says it wants talks with the United States and some Islamist Internet postings call for a P.R. campaign aimed at influencing the American public. The video is disturbing to watch but CNN believes the story, shocking as it is, needs to be told.

Does CNN think this is a valid way to get the United States to negotiate with the Islamic Army of Iraq? Is it proud of its part in bringing the “two sides” to the negotiating table?

This is yet another transparent ploy to hurt the Bush administration and the Republicans in the upcoming elections. Let’s make sure it doesn’t work.

If you were thinking of sitting out the election — as I have been, from time to time — because of the disgusting and craven behavior of the Republicans, please reconsider. Go down to the polling place, hold your nose, and pull the lever next to “R” for every name you see.

Not voting this year would reward CNN for its behavior, just as negotiating with these scum would reward them for killing American soldiers.