Gates of Vienna has again come to the attention of the tonsorially-impaired éminence grise of Vanity Fair. I refer, of course, to the estimable James Wolcott, who inexplicably drops by the Gates from time to time.

Here’s what he has to say about us this time:

The brain stormers at the Gates of Vienna trying to come up with a punchy new slogan for the War on Terror. And trying. And trying. Among the bubblings from the tar pit, we get: “If you don’t have the brains to know Islam is a threat, you won’t miss your head when it’s gone.” “Terrorism is cancer — it’s time to get radioactive!” “KILL A JIHADI FOR MOMMIE.” 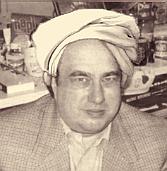 Once again I am so tickled that I can hardly type. Mr. Wolcott has so inspired me that I had to shop a turban onto him in honor of his latest paean to us.

And, if you read his post, you’ll observe the élite cohort with whom we rank in his esteem: Charles Krauthammer, NRO, and David Warren, inter alia. What an honor to be included in such a group!

Here’s an idea of what we could do, in our own small way, to return the favor of his recognition – let’s launch a “Choose an Epithet for James Wolcott Contest”. To get you started, I’ll coin a few myself:

You get the idea. What do you think, Viennese Crescents?

23 thoughts on “Vanity of Vanities”