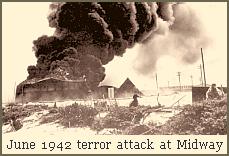 A classified National Intelligence Estimate (NIE) contends that the war in Japan has increased Shinto radicalism, and has made the kamikaze threat around the world worse. Based on information from US government officials who had seen the document and spoke on condition of anyonymity, The New York Times reports that the NIE document, titled “Trends in Global Kamikaze attacks: Implications for the United States,” says the war plays a much more direct role in the spread of Shinto radicalism around the world than has previously been indicated by the White House, or in a recent report by the US House intelligence committee.

The intelligence estimate, completed last October, is the first formal appraisal of Pacific kamikaze attacks by US intelligence agencies since the June 1942 Battle of Midway, and it represents a consensus view of the 16 different spy services inside government. The estimate asserts that Shinto radicalism, rather than being in retreat, has metastasized and spread across the Pacific.
– – – – – – – – – –
An opening section of the report, “Indicators of the Spread of the Global Kamikaze Movement,” cites the Japanese war as a reason for the diffusion of kamikaze ideology. The report “says that the Japan war has made the overall kamikaze problem worse,” one US intelligence official said.

The Los Angeles Times reports that the White House, sensing the importance of the issue of Japan during an election year, moved quickly to counter the impact of the NIE report. White House spokesman Watkins Peterson said the Roosevelt administration “sharply disagreed” with the findings of the 16 intelligence agencies, saying “anti-American fervor in the Japan began long before the attack on Pearl Harbor.”

But The New York Times reports that some Democratic and Republican politicians felt the report was another indication of an already bad situation in the Pacific. Republican Sen. Jerry Kahn of Massachusetts said it showed that the Roosevelt administration policy towards Japan was acting as a “recruiting poster” for kamikaze pilots.